"Multiple Visions: A Nation of Immigrants" is exhibition poster! 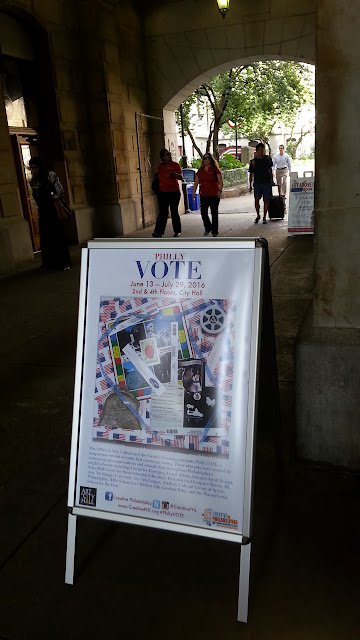 I was at City Hall yesterday and was finally able to see the Philly VOTE exhibit that I participated in along with the Dumpster Divers.  It was a shock to see my piece, "Multiple Visions:  A Nation of Immigrants", blown up to poster size at the entrance to the City Hall Gallery. No one had told me.  I had gotten used to the idea that it was the image on the electronic postcard.  Now I saw it in large posters in a variety of locations throughout City Hall, as well as on 8 1/2" x 5 1/2" hard copy postcards. 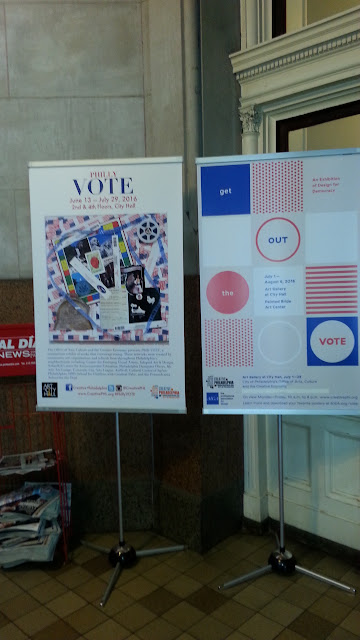 When I actually saw it in its glass case on the second floor,  it was a relief to see it back to normal size, among all the other Dumpster Diver entries: 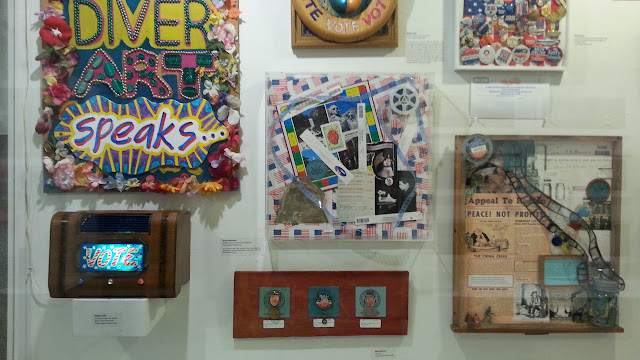 One advantage of the large poster is that it becomes possible to read "PETITION FOR NATURALIZATION" repeated on the document in the bottom. 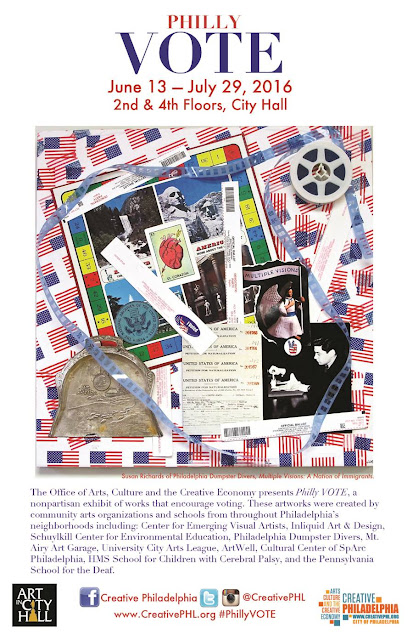 The petitioner for naturalization was born in Greece in 1883, occupation Peddler.  This document is among the ephemera discarded by the National Archives and given to the Philadelphia Dumpster Divers, as is the microfilm and the Archives logo from the film box. 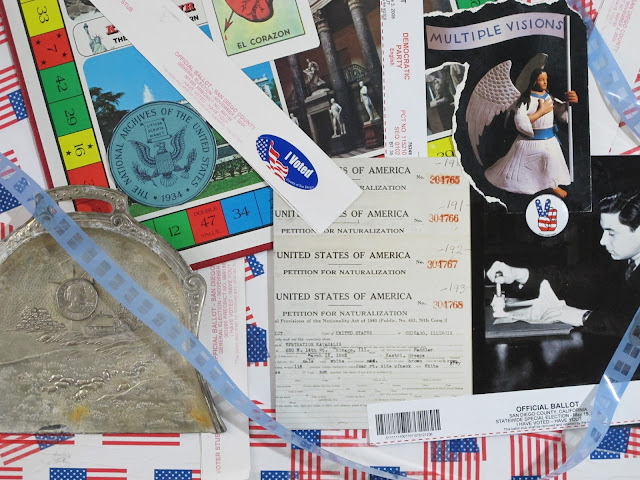 I chose this document as a reminder of our long history of being open to immigrants, making for a nation of "Multiple Visions".  The ballot stubs were saved from when I lived in San Diego County.  As I was making this, I realized how fortunate I was to have lived in a border area for over thirty years, infused with Mexican language, music, food, art, and culture.  It was a privilege to live in a bi-cultural area.   The liberty coin atop the peaceful silver scene conveys that liberty includes a sense of safety, a place to have a home and raise one's family.  I think of J.S. Bach's "Sheep May Safely Graze".  The United States has always been a haven for people who were not safe in their countries of origin.

I am so proud of our great city this week during the Democratic National Convention, and am very proud that my piece "Multiple Visions: A Nation of Immigrants" plays a part in greeting all the visitors and inviting them to see PHILLY VOTE at City Hall!

Posted by Susan Richards at 3:23 PM No comments: 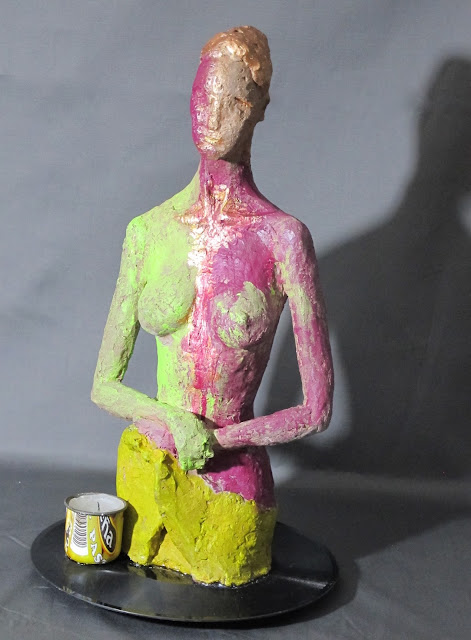 Now she has a name:  Sweet Georgia Brown, after the record she's mounted on.

This is her final incarnation.  I liked her better plain but once I added the golden embellishment there was no going back.  So I scumbled the gold paint, removed the bead I had put on her forehead, and added the candle and the record.

You can see her gradual journey from the following entry a few months ago.  What's a few months, when she started in 1962?

It's all an experiment.  Is it better with the golden vine growing up the curves of my sculpture's torso?  Does it detract?  Or is it just a different concept? 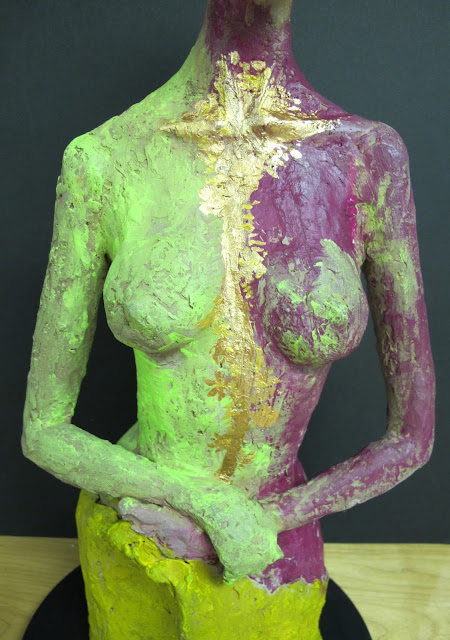 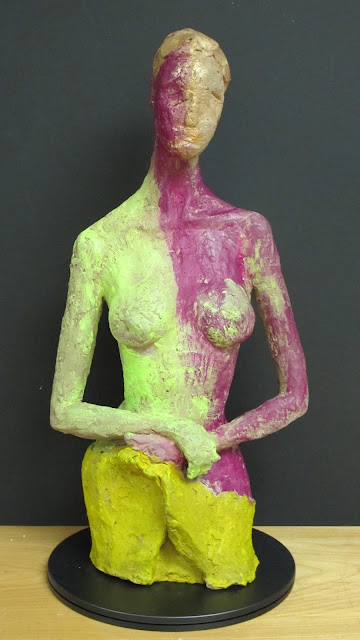 I liked the effect of painting the fired red terra cotta clay with acrylic, especially since the piece was originally done when I was a teenager, around 1962-ish, and then dug out of storage to paint in 2016.  I remember the model well. She was with us for several weeks, and was kind to me, a kid earning my scholarship to an adult class by being the class monitor.

The contours of her back were a natural for a plant running along her spine and branching out, caressing her curves, the bones of her shoulder blade. 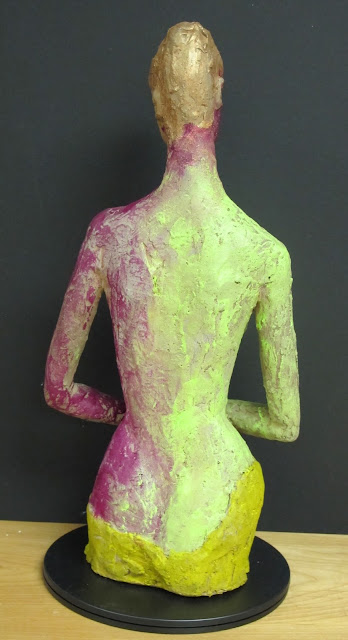 Now I wish I had thought to photograph it before I started painting her. 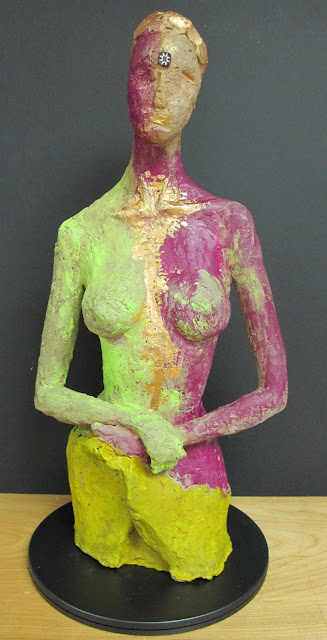 When I first painted the clay I felt like my color choice reflected the model's personality, which remains very real to me. The brown side of her face is close to her natural skin tone.  She was a woman of color, perhaps African-American and Puerto Rican.  Adding the gold embellishments and the third-eye emblem makes her iconic, archetypal.   I think of the figures on Hindu temples: 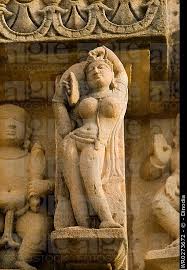 Looking back on it, I think I kept this sculpture for so many years because of what the model meant to me, when most everything else I made in that era was destroyed or lost.  Only now can I see that as an awkward teenager it was a gift to experience a middle-aged woman so at home with her body, with nakedness, with sensuality.  I am older now than she was then.  I still remember her.  Unearthing this sculpture from the past and updating it feels like my hommage to her and my thanks.

Posted by Susan Richards at 10:27 AM No comments: 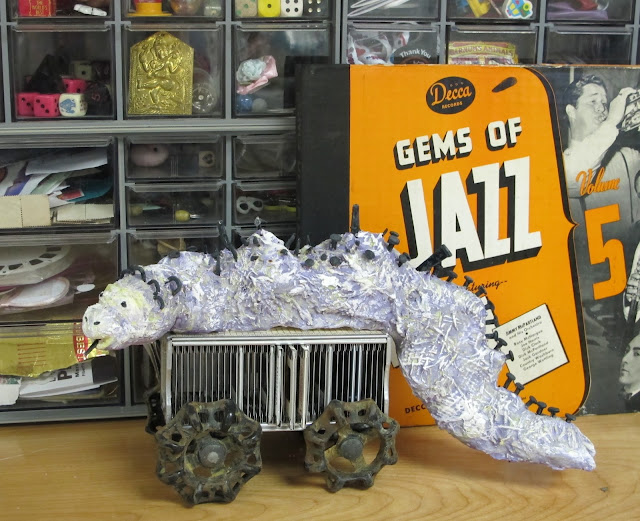 Dragon Tale is  repaired!  She is up and running.  J-B Kwik cold weld epoxy is wonderful.  I am a fan.  I will take her over to the Community Art Center in Wallingford next week as my entry in their Member's Exhibition.

I had been aware of African Power Figures from the time I was in high school and saw large numbers of them at the Metropolitan Museum. I can remember being surrounded by them and feeling their collective numinous energy.  I saw these two recently at the Philadelphia Museum: 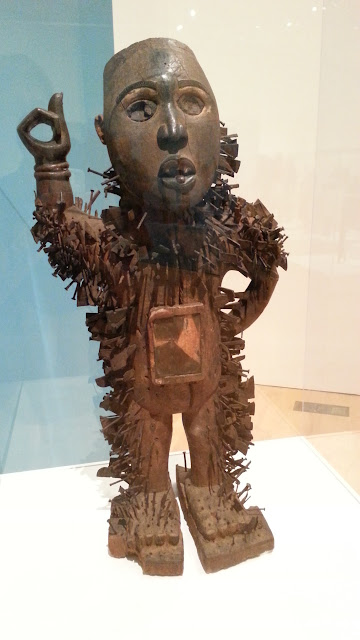 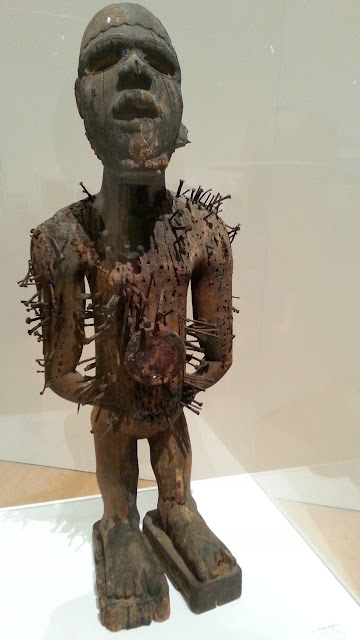 It reminded me that in the back of my mind when I was making Dragon Tale I had recalled the power and energy of using nails. To my surprise, when I looked on Google Images for African Power Figures there were also some of animals, which I had not seen before, like this double-headed one: 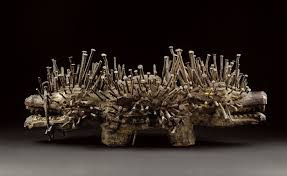 Dragon Tale of course is sweeter and more whimsical.  She carries a different kind of power, the power of history.  As I said previously, "This dragon has tales to tell and steadfastly guards that history,"  in this case a history of an earlier media format: slides. 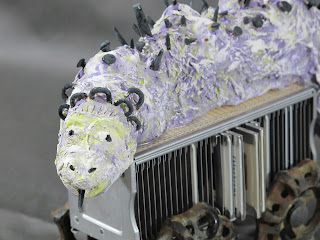 Posted by Susan Richards at 11:13 AM No comments: