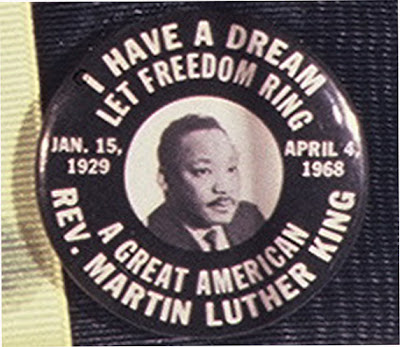 I told him that when his grandpa and I were married and his mommy was a baby, we were students at The Martin Luther King School for Social Change. As he gets older he’ll learn the rest.

It was a small school, a dozen or so students, founded by radical Quakers, American Gandhians, on the campus of Crozer Seminary outside of Philadelphia. It was an interesting place to be on April 4, 1968, when Dr. King was assassinated. It turned out that Dr. King was an alumni of Crozer Seminary, having gotten his Masters Degree there in 1951. The King School students, together with the Crozer Caucus of Black Seminarians (another dozen or so people), approached the Crozer administration to ask that Dr. King’s picture be hung in the Board Room. The room had a large rectangular dark wood conference table in the middle. The surrounding walls were hung with portraits of eminent alumni - all white.

Today this seems like such an obvious and certainly minimal request. In those days, it was controversial. They actually said no! It appeared that they were not proud of this alumni, that they did not want to acknowledge him as one of theirs, that he was too much of an agitator, a radical troublemaker. Negotiation and tense confrontation went on for a period of time.

It is perhaps in the footnotes of history that its complexity takes shape. Crozer Seminary did want to be on the cutting edge of social change. That is why they shared their campus with The Martin Luther King School for Social Change in the first place. They appear to be carrying on that mission today, in their present incarnation. The people who made the unfortunate decision in 1968 are no longer around. We may never know the back story.

I hope that as my grandson grows older he will learn that Martin Luther King Day is about more than parades and a day off from school!
Posted by Susan Richards at 7:22 PM No comments:

First Beach Walk of the Year 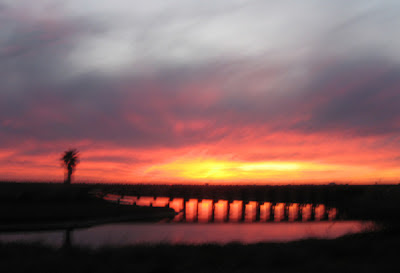 A little girl scratched "2008" in the sand with a stick, soon to be washed away by incoming tide. Couples of all ages strolled hand in hand at the water's edge, watching the sky change. Families posed for their New Year's Day snapshot in front of the spot where the sun was spreading a shaft of gold on the water. Children were everywhere: babies wrapped in blankets, toddlers on shoulders, older ones playing in the sand. There were only a handful of surfers and one lone fisherman. I was among the solitary walkers, since my honey had a cold. It was definitely a holiday crowd.

A foreign tourist, a woman walking south as I was coming back north stopped to greet me. "Where does it end?" she asked. I was startled by her question, given the vastness of the shoreline, but it was a language problem, so the answer was not "the tip of South America". I managed to suggest she walk down to Flat Rock and back, the same walk I had just taken.

I snapped this shot on my way home, of the lagoon flowing under the railroad trestle towards the ocean. A good way to start the New Year, with a fresh supply of sand now on the floor of my freshly washed car.
Posted by Susan Richards at 7:34 PM No comments: