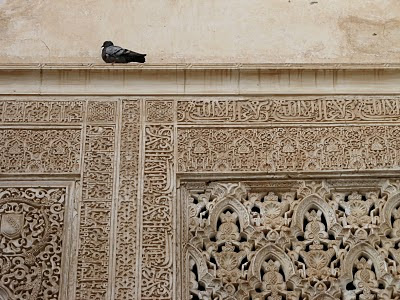 I didn’t expect the vendors from Nepal, with their beautiful pseudo-Pashmina shawls, to be in the courtyard of the Granada Cathedral on Easter Sunday morning, reminding me that globalization is pervasive on many levels. Nor did I expect to be accosted by a Gypsy woman at the gated side entryway, clearly not dressed like the going to church crowd, offering me a sprig from her pouch full of rosemary, which I accepted. I couldn't understand her language, but I understood the message. She looked me directly in the eyes and grabbed my hands. Her clustered fingers touched the center of my palms with the point they made. We both smiled. It was both a fortune telling and a blessing, and both seemed good.

It was a blessing from a Gypsy woman to a Jewish woman, on Easter Sunday in the courtyard of a Catholic Cathedral. Behind her were vendors with plastic made-in-China souvenirs, Nepalese fabrics, and maybe even some things made in Spain. All as I was about to visit an amazing Moorish palace, The Alhambra. Was this a dream?

The Alhambra, with its mystical architecture, a reflection of the universe, continually opened out levels of consciousness and nourished my soul. Until, that is, when we came to the room where the Edict of Expulsion was signed in 1492 by Ferdinand and Isabella after they had conquered the area, condemning Jews to expulsion, conversion, or death - and the same fate to Muslims a little later on. The juxtaposition was jarring.

The strange mosaic of Spanish history once again challenged linear understanding. I can’t really begin to put it all together. All I know is that in my dreams I am wide awake. And I am still dreaming of Convivencia. The sprig of rosemary is dried out now, but it is still fragrant...

Posted by Susan Richards at 4:23 PM No comments: