All of Ulysses transcribed on rubber gloves???

It took Jessica Deane Rosner two-and-a-half years to transcribe the 265,00 words of James Joyce's Ulysses, using sharpie markers on yellow rubber kitchen gloves.  I experienced all 310 gloves of the Ulysses Glove Project today at the Rosenbach Museum & Library in Philadelphia, suspended from the ceiling in a spiral.  As you follows the spiral, slightly above one's head but low enough to be somewhat readable, it moved from the beginning of the novel with more space between each glove to a dense cluster of gloves, the still point at the center of the spiral, at its end.

In Rosner's words, "For me, yellow rubber gloves suggest the simplicity and quietness of most people’s lives—especially women’s lives. As cleaning tools they come into contact with the filth we generate on a daily basis, and are designed to protect us from it, to keep our hands pristine, dirt and germ free. Rubber gloves are the objects that not only distance us from the byproducts of human existence, but help us (help working women) make those byproducts—the waste, dirt, dust, stains, stools, footprints— invisible. By contrast, Joyce’s Ulysses called the very same muck to the fore of literature, put it on display, and told us that this is it: This is who we are and what we make. This is life." 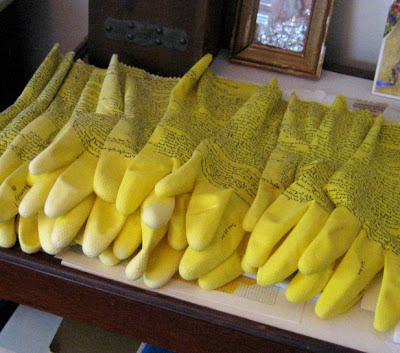 It was wonderful to see this work exhibited together with the Rosenbach's collection of Joyce's manuscript pages from Ulysses.  His handwriting was about the same size and spacing as Rosner's calligraphy on the gloves,  just more diagonal on the page.  The resonance between the two was uncanny. 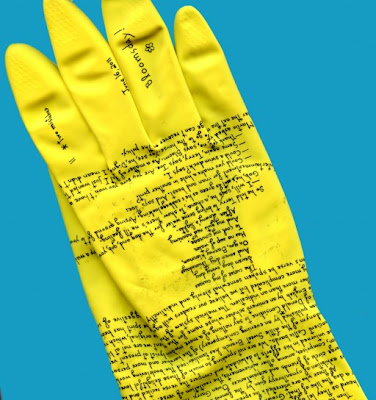 Each  glove indicates on its fingers the date it was completed, along with the number of mistakes.  The one above also indicates that it was done on Bloomsday in 2011, the traditional celebration of June 16, 1904, the day on which the novel happens. Rosner started the project in 2010, and finished the last glove, #310, on June 16, Bloomsday, 2012. In 2013, Bloomsday coincided with Father's Day.  Joyce fans gathered on the steps of the Rosenbach from noon to 7 p.m. to read Ulysses aloud, as they have on Bloomsday for many years. This year, Jessica Deane Rosner's Ulysses Glove Project was hanging inside at the same time. 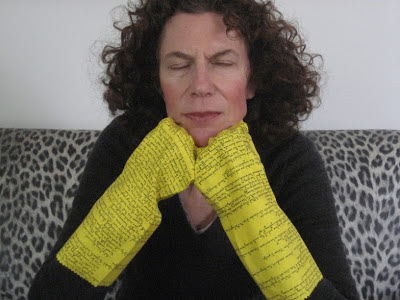 The Artist with the Ulysses Glove Project

Posted by Susan Richards at 2:38 PM No comments: