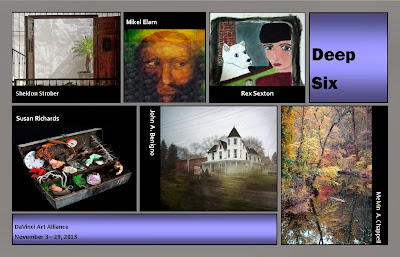 Here's how it went:

- A neighborhood guy came in with a large white poodle, saying he (and the dog) came in frequently.  I hoped the dog didn't wag it's tail too close to the pedestal on which one of my assemblages was perched. The man was chatty and very nice.  I ignored the early afternoon alcohol on his breath and was relieved when he and the dog left.

- A couple came in looking for John Benigno's workshop on Photographing Your Own Artwork.  I explained that the workshop had been the previous Sunday, and invited them to see the show.  They said "we already saw it".  I asked their names so I could tell John they were looking for his workshop.  They ignored my question and left.

- A Da Vinci member came to get an ornament to decorate for the upcoming Holiday Show.  She saw that Sally Willowbee and I had given a presentation together, and said "I knew her parents."  I said I did too, from the Martin Luther King School for Social Change, where Sally's father, George Willoghby,  had been my teacher in 1967-69 and afterwards.  Small world.  You live long enough and so much comes full circle...

- A Da Vinci member and her husband came in to leave work for the member's Holiday Exhibit because they were going to be out of town on the actual delivery date.  I was touched by how moved they were by my work.  She said, "I look at your work and feel that I know you."

- My friend Andrea Snyder stopped in after a book arts event.  It was a great time to visit, and to both my surprise and hers, she joined the Da Vinci Art Alliance co-op.

- I managed to read a chunk of The Picture of Dorian Gray by Oscar Wilde. I wouldn't have bought it or gotten it from the library, but since it was a free download I decided to read it.  I think I appreciate it more now than if I had read it when I was younger.

- A man came in, didn't want to talk, looked around for less than ten minutes and left.

- David Foss, the Gallery Director, and I had a chance to actually visit together.  We have much in common with our love of www.theartstack.com and our memory for and collection of visual images.

- There was no interest on any visitor's part in buying any of the fabulous work in the exhibit. I did get to read the Sunday funnies however.  Such is the life of an artist... 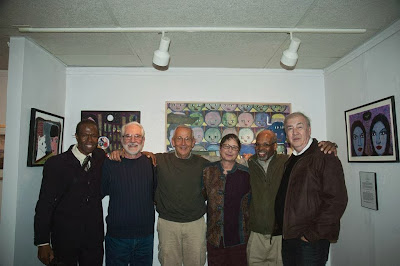