The sculpture comes alive, seen from so many angles, through sunlight and shadow, behind branches and looming beyond the next curve on the trail. One becomes aware of the sculptural qualities of the trees, and of the natural earth qualities of art made from stone, metal, and wood. They breathe together into a whole. It is art's natural habitat, completely integrated with nature.

www.groundsforsculpture.org, is a 35-acre park near Princeton, New Jersey, celebrating its tenth anniversary as a public non-profit. It was fun making this video of our visit. I know we'll be back when the Fall leaves are at their peak, and when the fragrance of wisteria infuses the air in the Spring. If the roads are cleared, maybe we'll even venture out to see sculpture in the snow..

Posted by Susan Richards at 9:32 AM No comments: 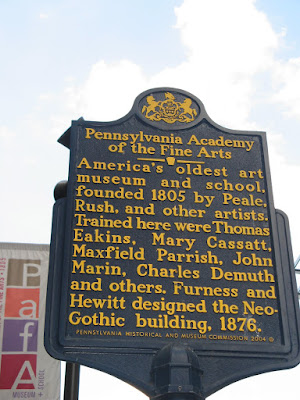 They say the unconscious is timeless. That's for sure. When I walked into the old Pennsylvania Academy building I expected to see the same room filled with white plaster casts of isolated body parts where I used to take drawing classes as a college student. Something was very different. Like paying admission to the galleries now - and at the senior rate. I didn't even know that a whole new building, with wonderful museum galleries and upstairs classrooms is now next door, and that the two buildings are soon to be connected by a sophisticated urban plaza.

The mystery of time and memory hit me hard. The painting that touched me most deeply was a portrait of a young girl by Robert Henri, done in 1926. Next to his name it said "student 1886 - 1894". Just knowing he had once been a student at The Pennsylvania Academy, in between going back and forth to Paris and before becoming a renowned teacher in New York City, a force behind alternative exhibition spaces, and a key player in the avante-garde of his day, was somehow comforting. The brush strokes in this painting could never be captured in a plate or on a monitor. Their lush and sensuous texture was practically edible. I had to restrain myself from touching. The colors vibrated. I was more familiar with The Art Spirit, the book of Robert Henri's philosophy of art, than with his painting. Here was The Art Spirit embodied.

Posted by Susan Richards at 11:23 AM No comments: 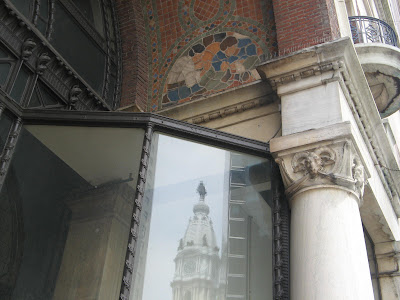 The bronze statue of William Penn atop City Hall tower dominates Philadelphia's skyline. Here my camera caught him reflected in the downtown window of a pharmacy.

The founder of Philadelphia, in 1683 Penn made a peace treaty with the Lenape Turtle Clan Chief Tamanend, saying in the Algonquin language "We meet on the broad pathway of good faith and good-will; no advantage shall be taken on either side, but all shall be openness and love. We are the same as if one man’s body was to be divided into two parts; we are of one flesh and one blood." Tamanend replied, "We will live in love with William Penn and his children as long as the creeks and rivers run, and while the sun, moon, and stars endure."

How different than other white settlers relations with Native Americans in that era of history! The Quaker legacy of justice and non-violence which remains part of Philadelphia's fabric today is one more part of the complexity of my new home, a city also torn by poverty and violence.

I have only just gotten here. My reflections have just begun. I'm sure my understanding will grow with time and as I meet more people. Meanwhile, I will keep taking pictures.

Posted by Susan Richards at 12:09 PM No comments: 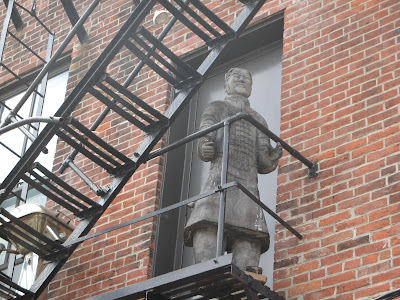 Had I not looked up I wouldn't have seen him. At first I thought it was a person on the fire escape of the building next to The Painted Bride Art Center. He is the purveyor of artistic history being made there - very fitting since he is himself artistic history. The Bride's mission statement says it all:

The Painted Bride Art Center collaborates with emerging and established artists to create, produce and present innovative work that affirms the intrinsic value of all cultures and celebrates the transformative power of the arts. Through performances and exhibitions, education and outreach, the Bride creates a forum for engagement centered on contemporary social issues.

Founded in 1969 by a group of visual artists who had recently graduated from the Academy of Fine Arts, the Painted Bride Art Center is a presenting arts organization located in Old City, Philadelphia. The Bride is part of the Alternative Art Space movement, which is a small genre of cultural organization in America that grew from a movement in the late 1960s and early 1970s. This movement sought to establish organizations where artists had greater control over the presentation of their work and were able to present the work of the underrepresented in commercial or larger established institutions such as women, people of color, gay and lesbian artists and the disabled. The Bride has evolved into an innovative, internationally recognized, artist-centered, multi-disciplinary institution.

The artistic goals of the Bride are to: provide a laboratory for “exchanging and exploring” ideas; support the creation of new work; collaborate and work with Philadelphia artists in creating and presenting new work; showcase new work that provides opportunities for community exchange and encourages activities and dialog beyond the stage or gallery; expose audiences to a deeper understanding of the artistic process; and advocate for artists and assist in furthering their careers.

...As the avant-garde has evolved to include more issue-oriented work, so have the efforts of the Bride evolved. The Bride is especially committed to Philadelphia-based artists and to linking them to community groups and issues.

...For 40 years the Painted Bride Art Center has remained an artist-centered space committed to the artistic process, the artist’s role in the community, and diversity. The Bride continues to address the needs of the Philadelphia’s artistic communities while remaining a strongly mission-driven organization.

In just the few weeks since I have been in Philly I have become aware of many more alternative exhibition spaces of all kinds, some a few years old, some just starting. I wonder if The Bride set the template 40 years ago. I feel at home.

Posted by Susan Richards at 5:40 PM No comments:

The Mummer's Museum in South Philadelphia is a gem. The guest book was signed by people from all over the world. It badly needed funds for climate control, infrastructure repair, and marketing. The Mummers Parade has been held on New Year's Day in Philadelphia since 1901, with Mummers Clubs competing in one of four categories: Comics, Fancies, String Bands, and Fancy Brigades. Apparently planning for the following year starts January 2nd, not to mention a big annual investment in costumes - a subsuming lifestyle for the people involved. The museum houses costumes and documents the history, music, and stories of the tradition.

It was fascinating to learn of the African-American origins of Mummer's tradition, as well as European. The Mummer's anthem was composed by an African American musician, James Bland. It is ironic that a tradition that has such deep roots in African American history is now comprised of all white Mummers Clubs. Blackface was even used until the early 60's, when the clubs phased it out because of pressure from civil rights groups. It seems like one more aspect of the many ways that Philadelphia is segregated, both overtly and subtlely.

And yet this is a unique form of American Folk Art that belongs to all of us. I know we'll be at the next Mummers Parade. I hope it won't be too cold on January 1, 2011, in Philadelphia.

Posted by Susan Richards at 4:18 PM No comments: 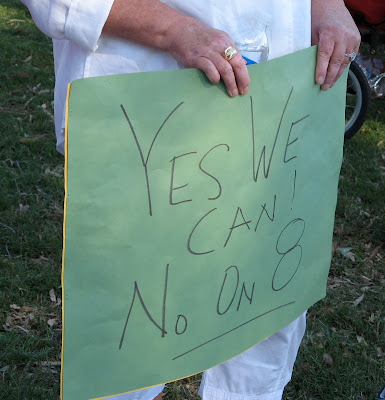 My photo of this middle-aged middle-class woman, a straight ally at a small-town demonstration in 2008, is one image of why "the arc of history bends towards justice."
Posted by Susan Richards at 12:40 PM No comments: