Newark Museum - I Love It! 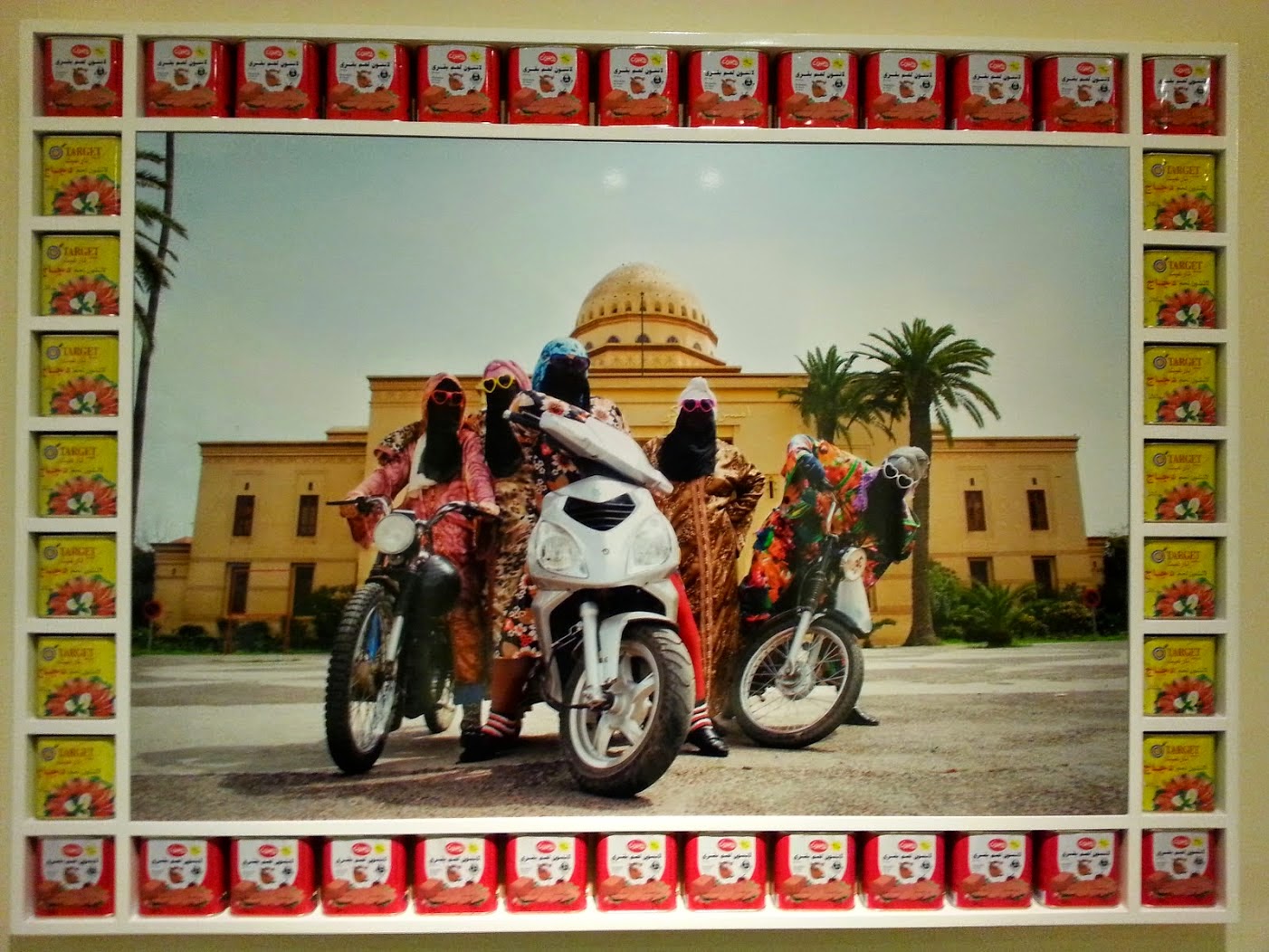 I was thrilled that the Arts of Africa section at the Newark Museum included contemporary art!  I had seen a lot of the work of Moroccan-born UK-based Hassan Hajjaj online.  His series 'Kesh Angels, on the biker culture of the women of Marrakesh, had made a big splash this year at a New York gallery. He's one of those international superstar artists who also does performance, fashion, interior design, and furniture. This was the first time I had an opportunity to see his work in person.  I somehow hadn't realized that his borders aren't flat.  The metal cans are intact in their cubby holes - fully 3-D objects.  Art on a monitor just isn't fully seeing.  (Better than not seeing it at all though I guess.)

Here's two more of his that weren't at Newark, just for fun because he is so cool: 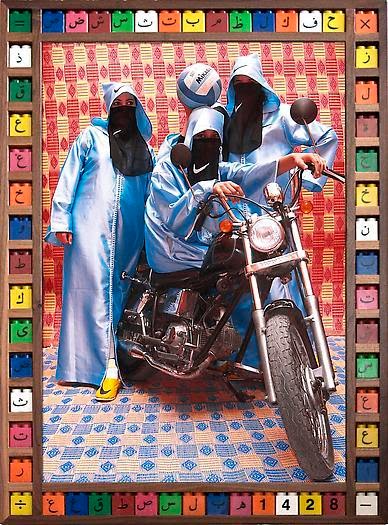 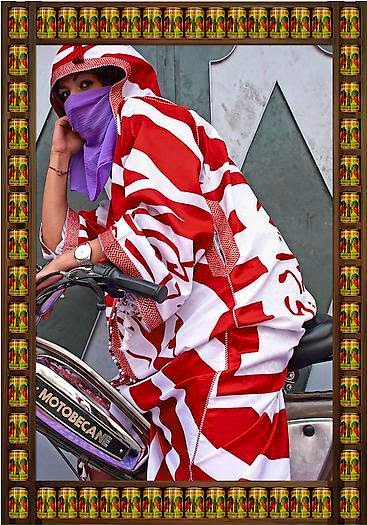 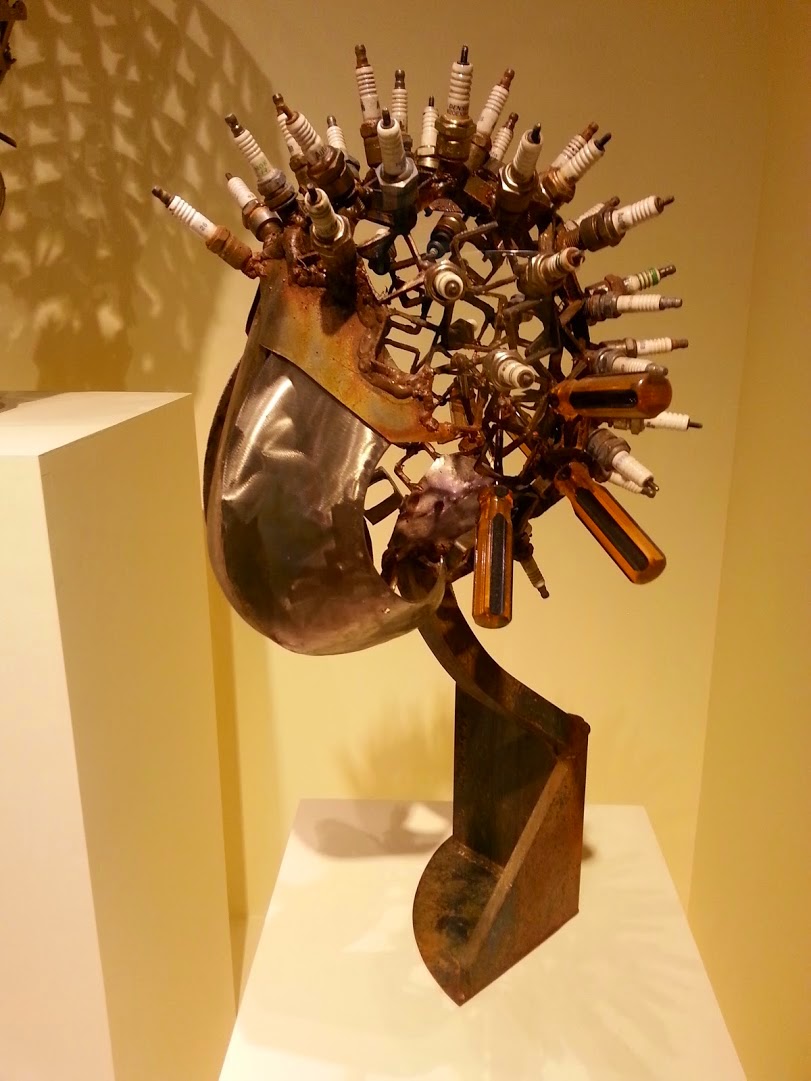 This textile commemorates Barak Obama's election and his first presidential visit to Ghana in 2009: 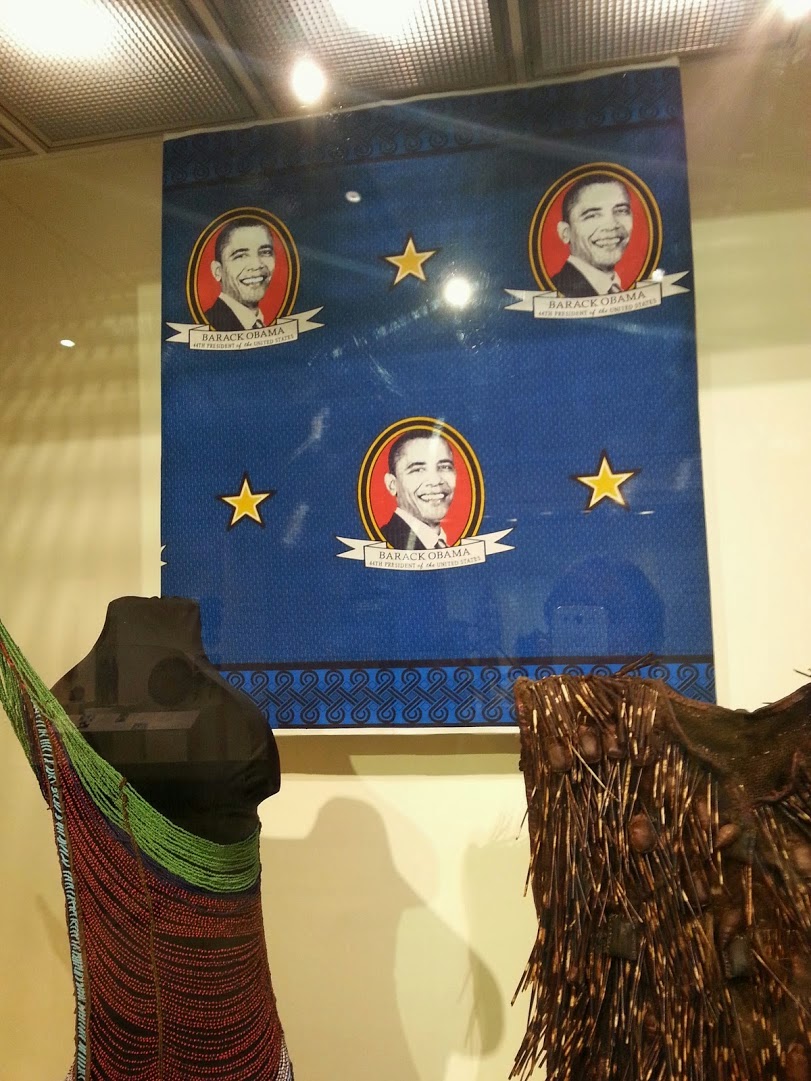 And of course, "Dry Season" by Nnenna Okore (born 1975, Nigeria; lives and works in Chicago). Handmade paper, jute rope, burlap and dye. "Okore transfigures urban detritus into art...A former student of the Ghanaian artist El Anatsui, Okore belongs to an artistic movement concerned with the culture of recycling in her Nigerian homeland."  So beautiful and iconic. 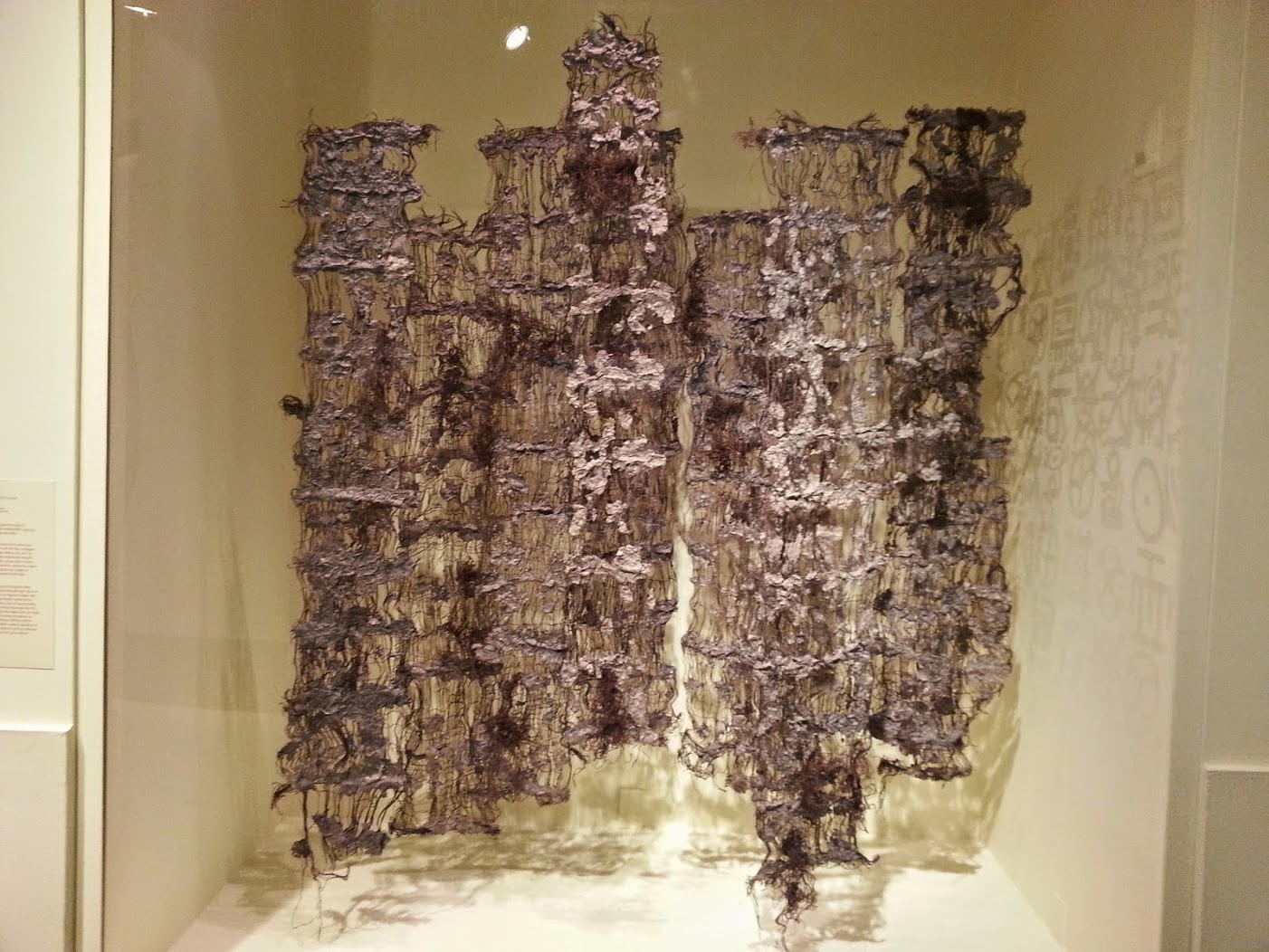 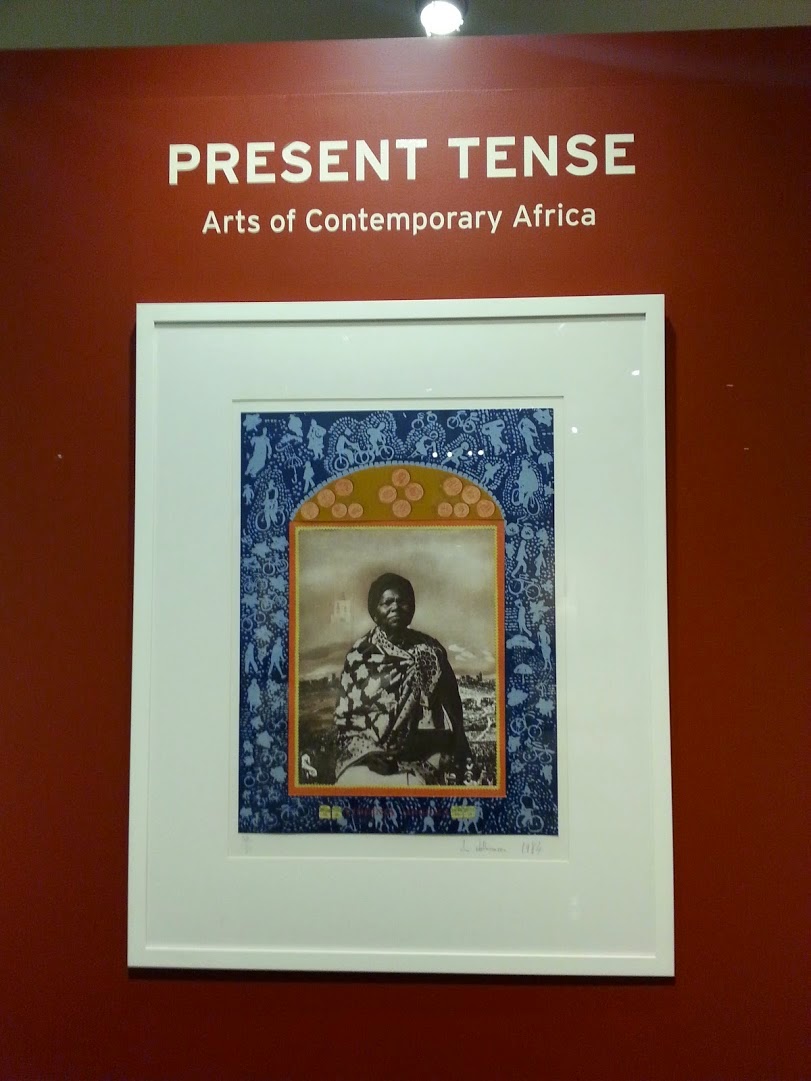 One more reason I fell in love with the Newark Museum today.

Posted by Susan Richards at 6:33 PM No comments: Links to this post

A Jewel of a Museum in Newark!

I couldn't stop watching this installation by Andrew Demirjian called "Morning Light".  I don't know how long the loop was, but every time I looked it was different.  He used more than twenty unwanted televisions.  I've seen these kind just sitting by the roadside..

It is part of the NJ Arts Annual, called Ready Or Not, with work by 40 New Jersey-based artists.  It wasn't why I went to the Newark Museum today, and I wasn't ready for it!  What a total surprise and treat! 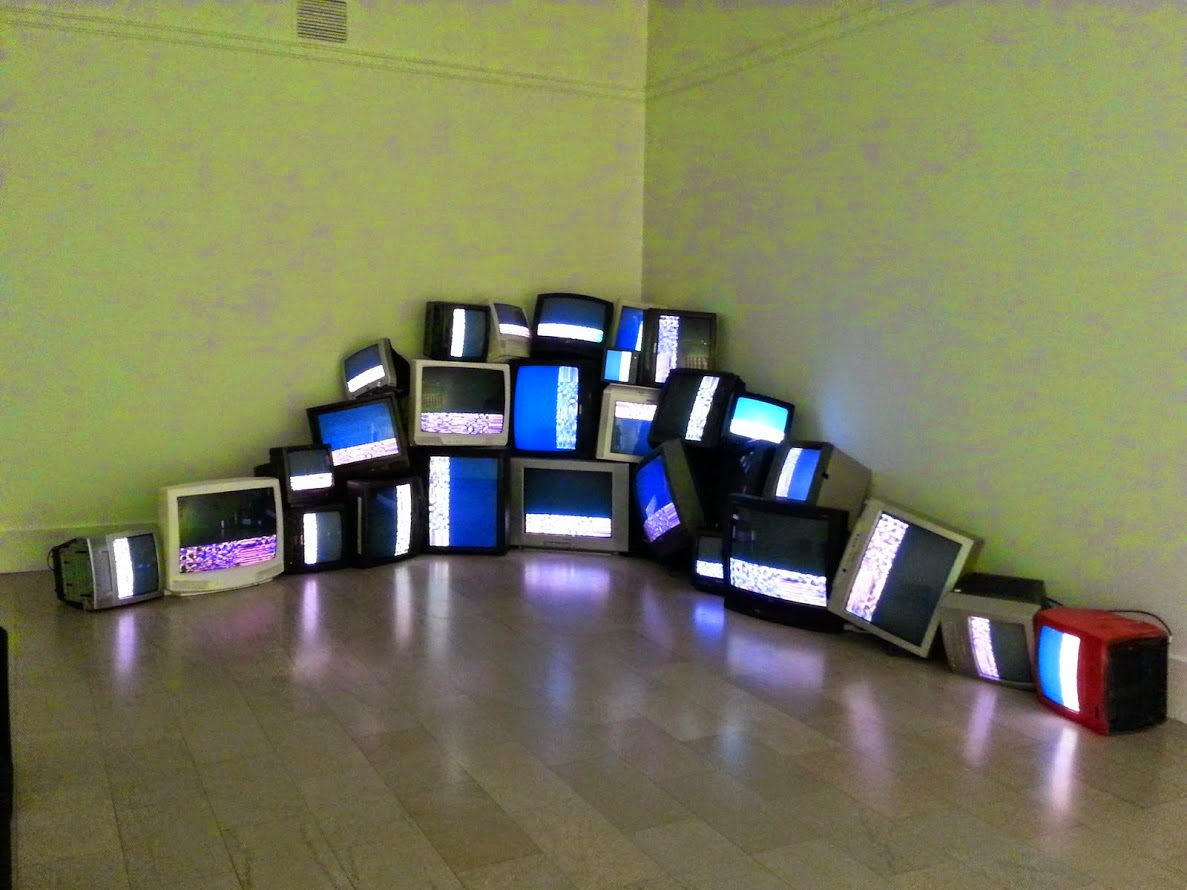 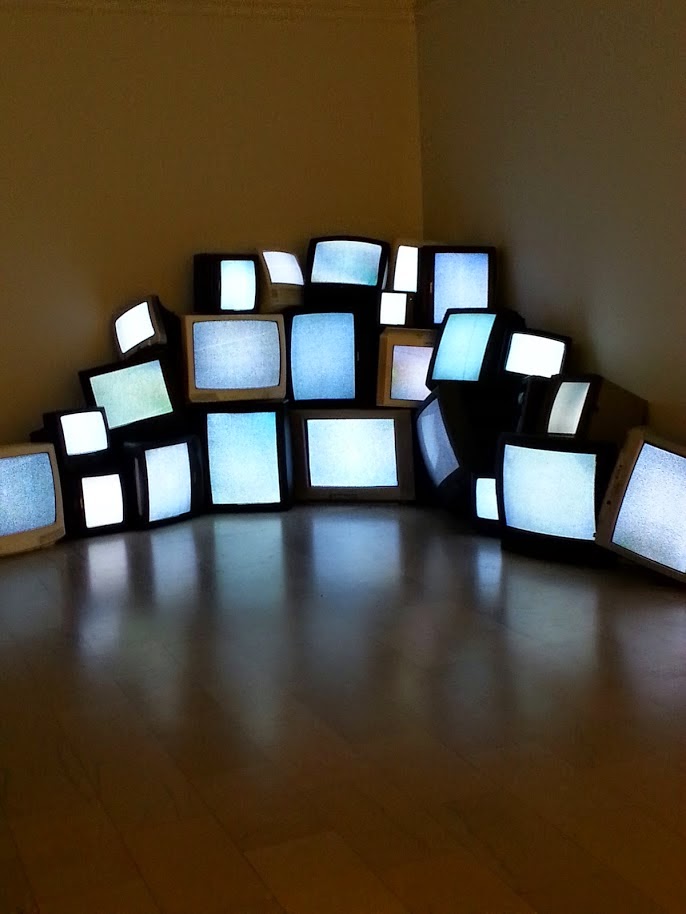 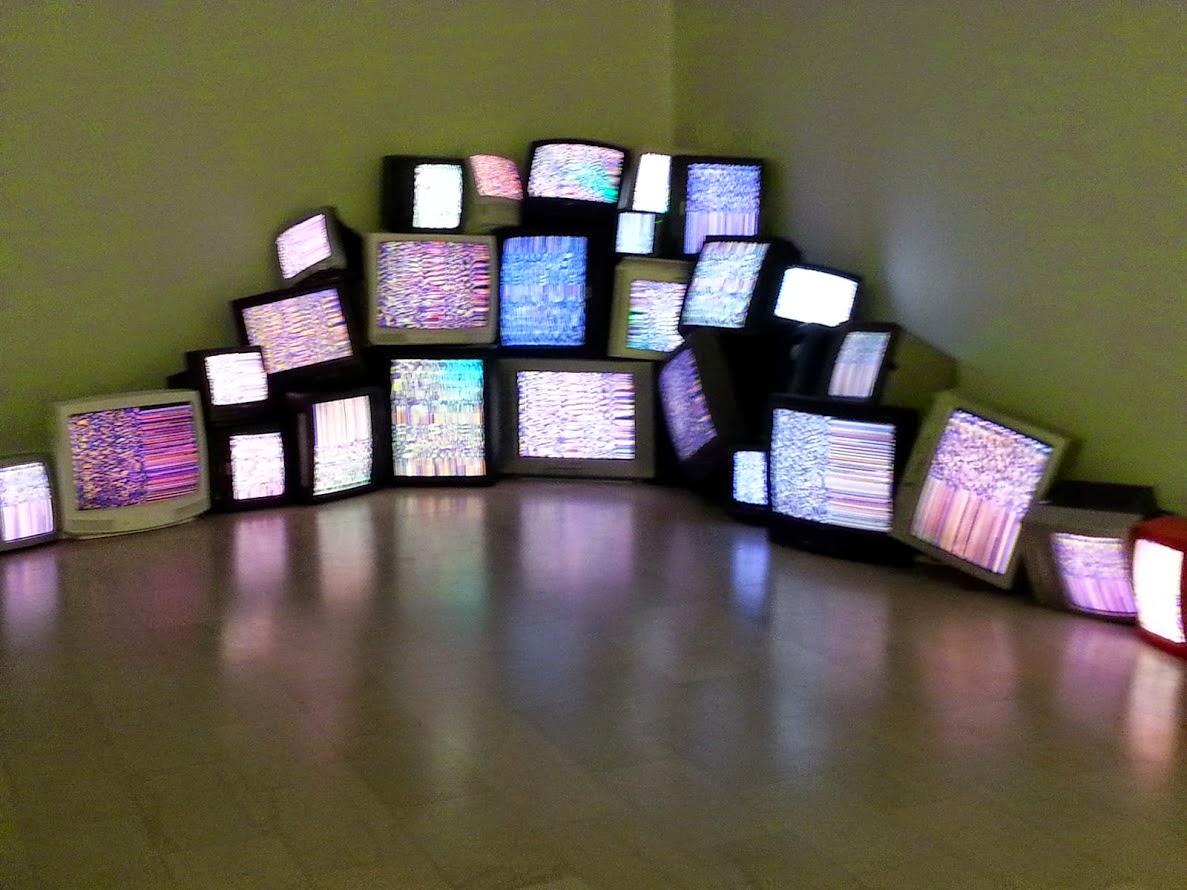 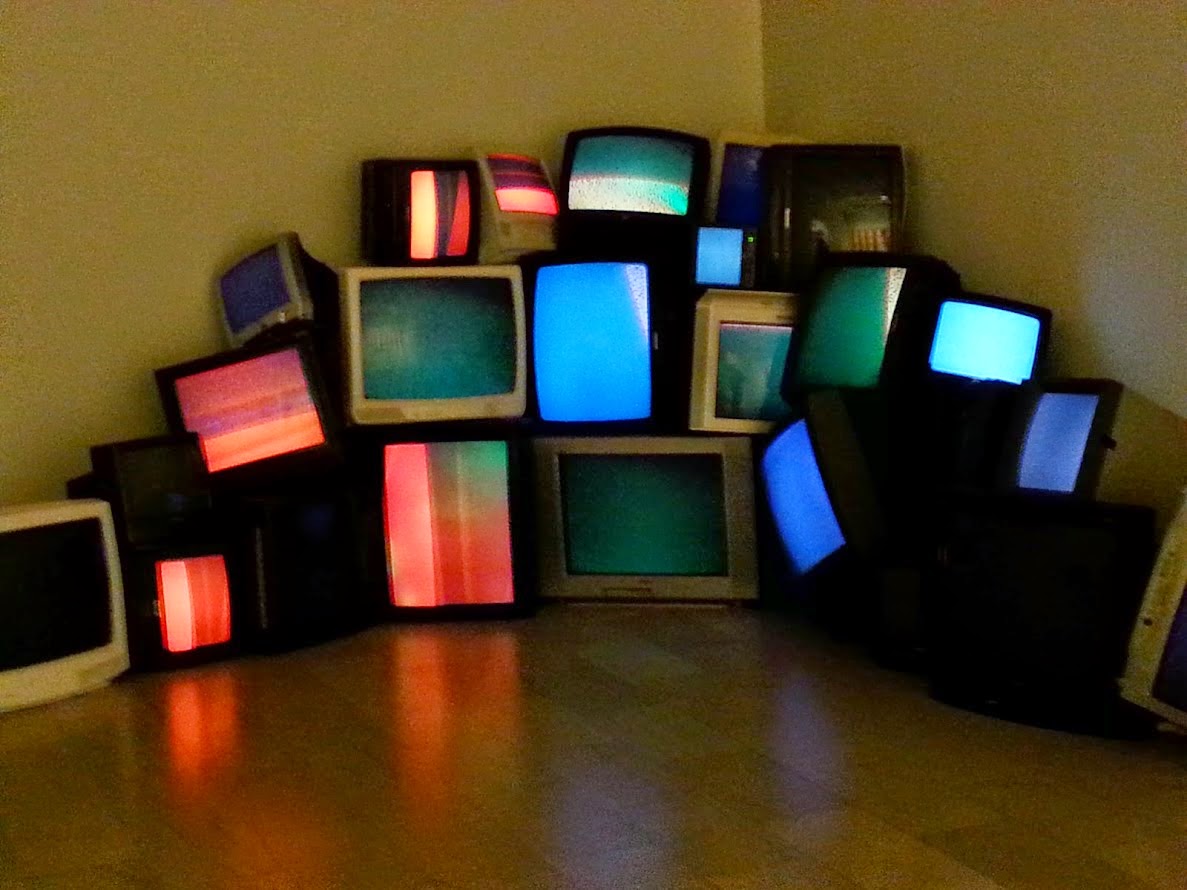 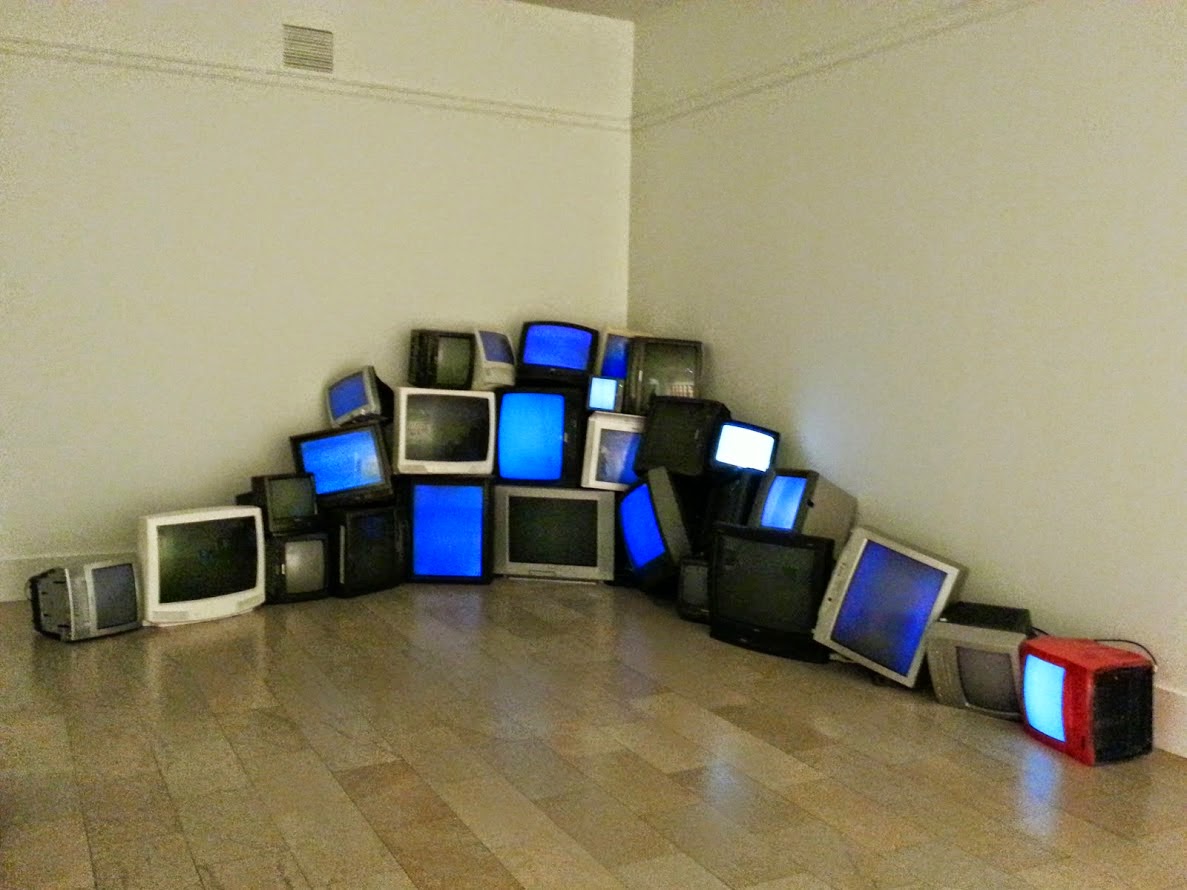 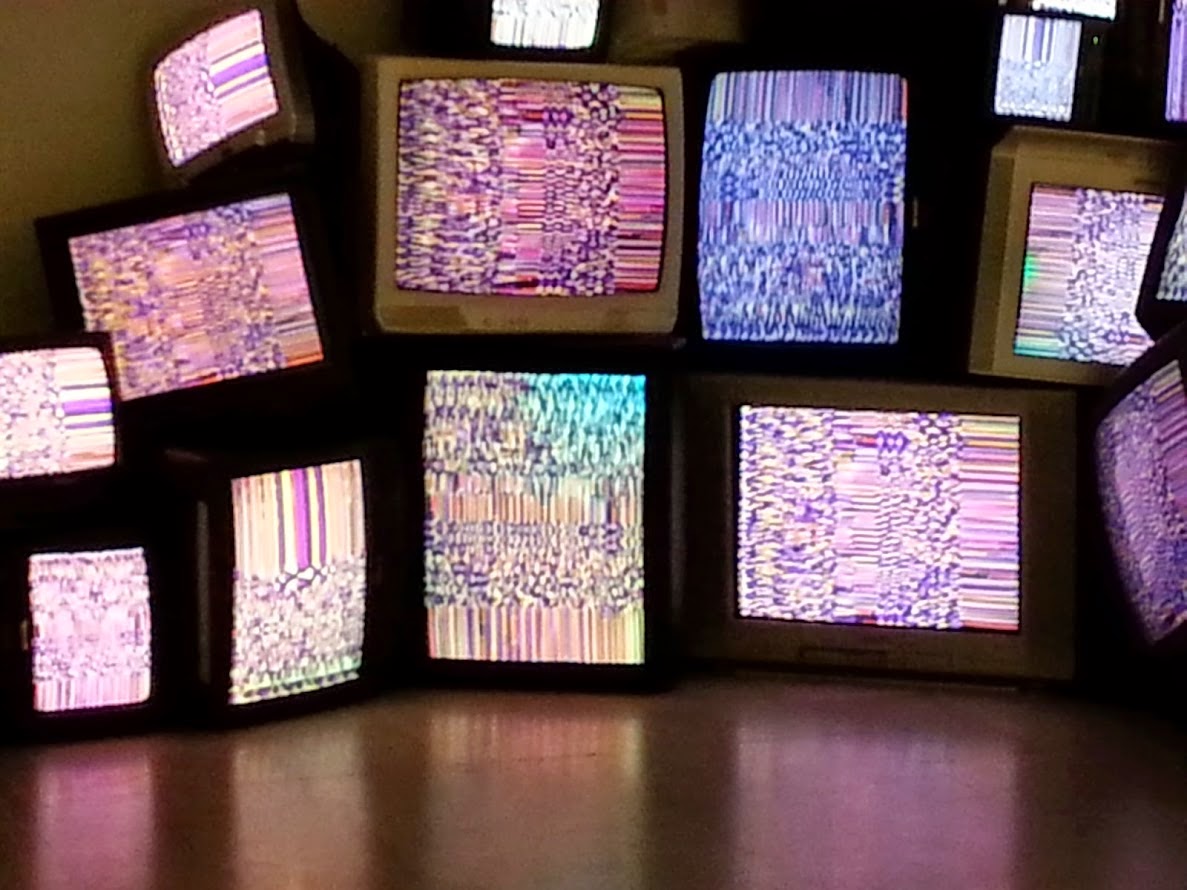 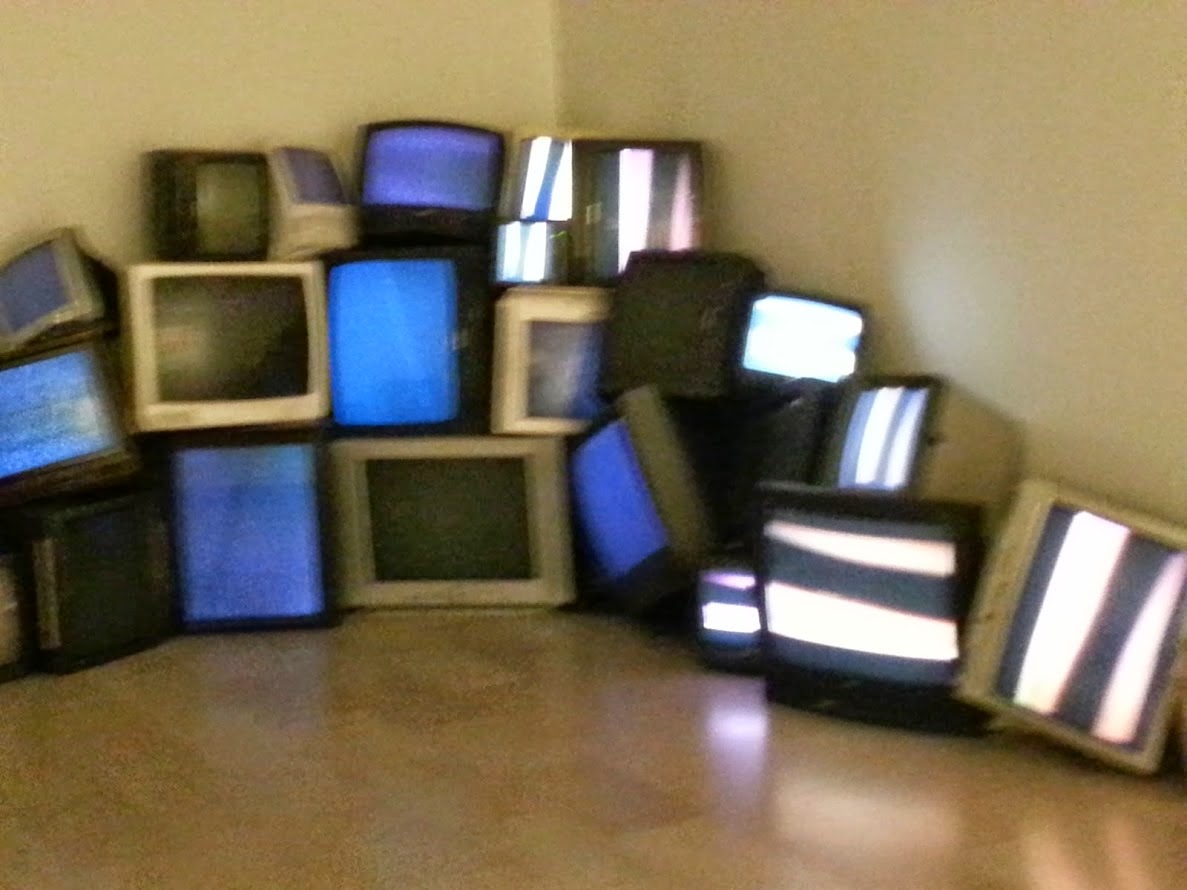 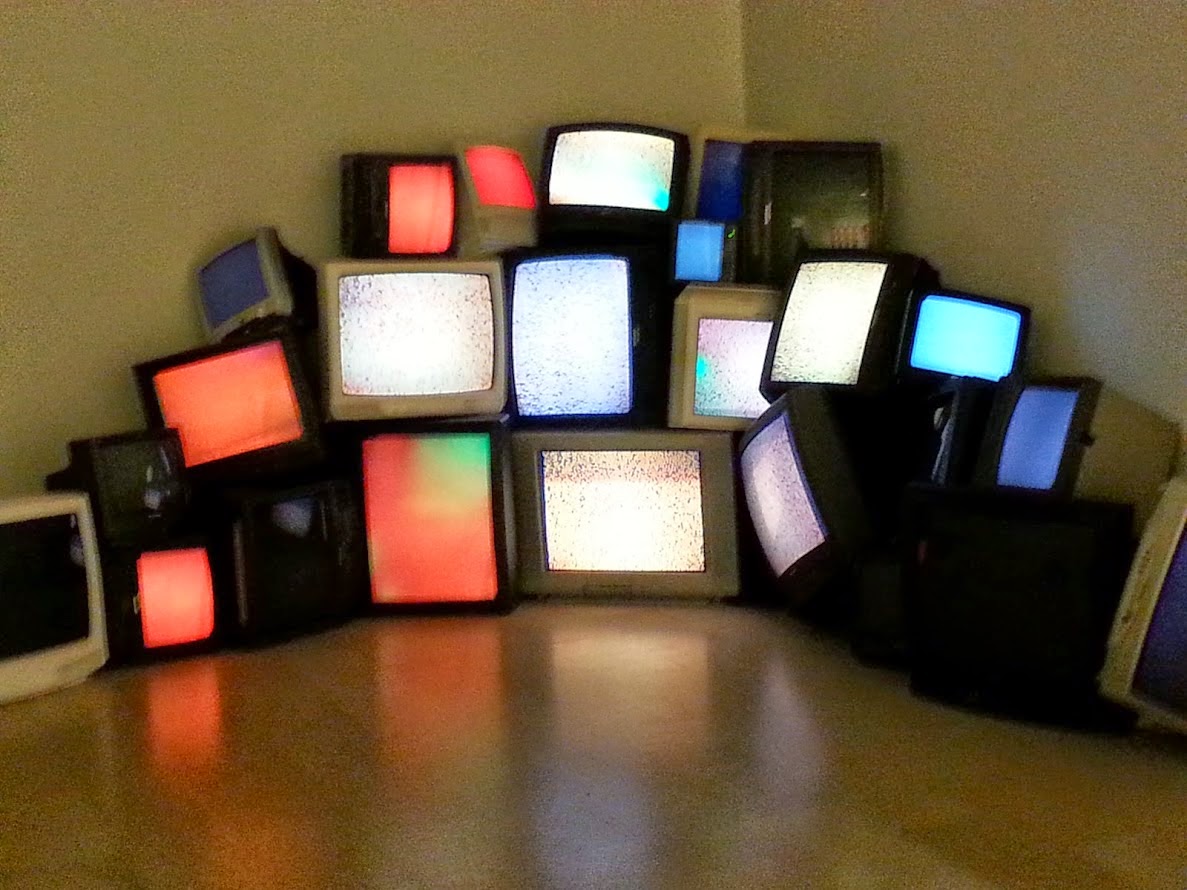 I got carried away.  I couldn't help myself.  I'd leave, go to another gallery, come back - and see something I hadn't seen before.  The blurb said all kinds of stuff about examining excessive consumption and an analogy to elderly humans in a capitalist culture.  Yeah, yeah, yeah.  For me it was about sheer visual beauty!


Posted by Susan Richards at 5:19 PM No comments: Links to this post 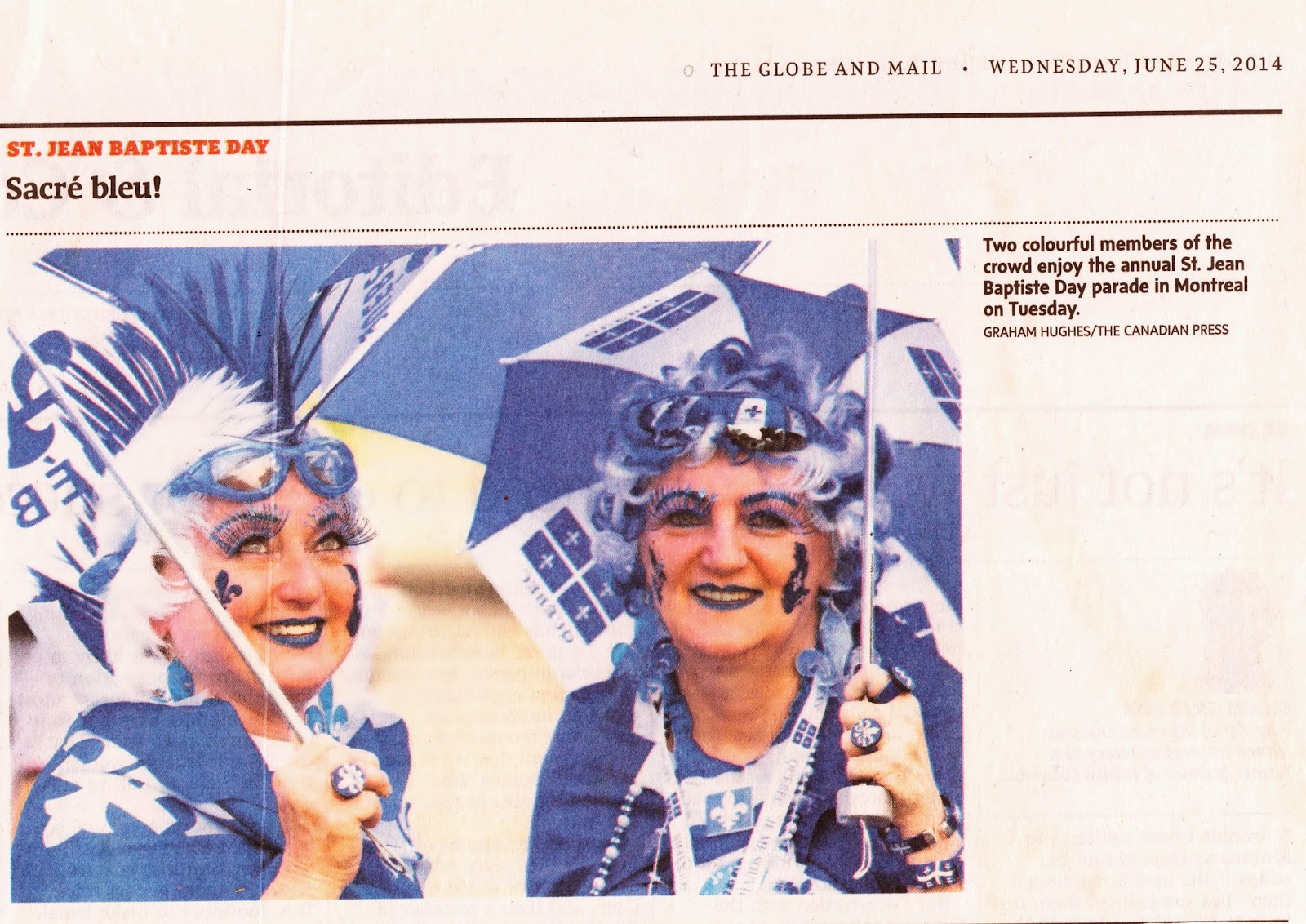 We had no idea that St. Jean Baptist Day, otherwise known as Fete Nationale, would take place on June 24th during our Montreal vacation. It celebrates the French culture, heritage, and history of the Province of Quebec. The English newspapers made no mention of it that day, but at least included the picture above on the following day - with no article.  The French newspapers were another story! 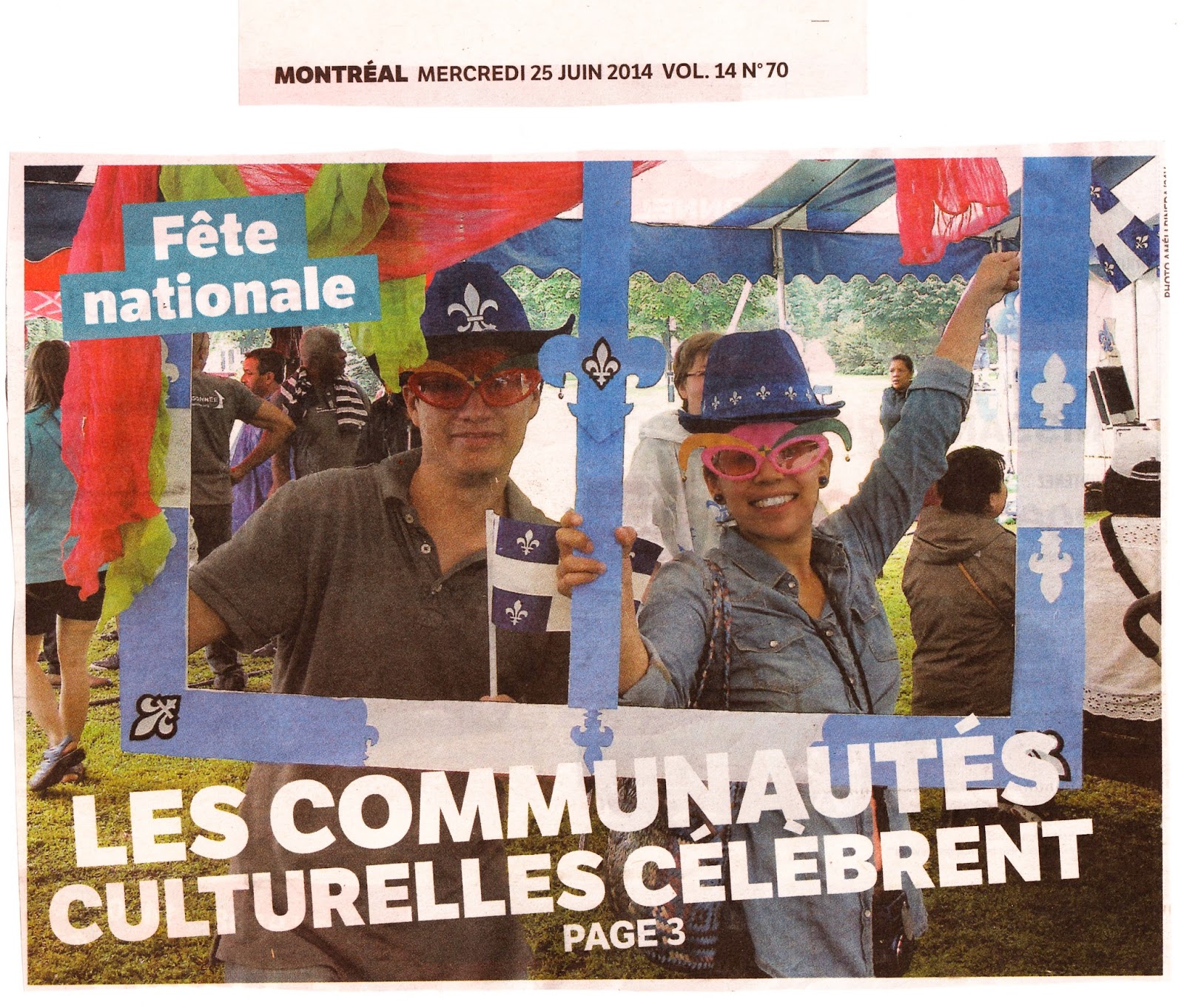 Everything was closed.  The downtown business district was deserted as if it were a Sunday.  Shops and museums were closed.  The post office was closed: 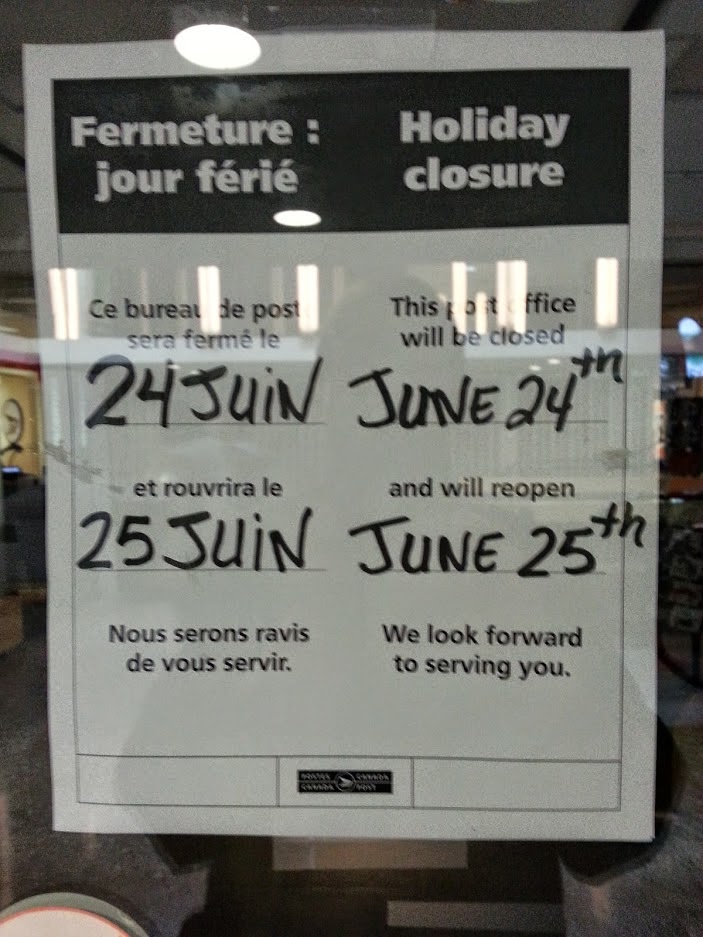 Even the grocery store was closed: 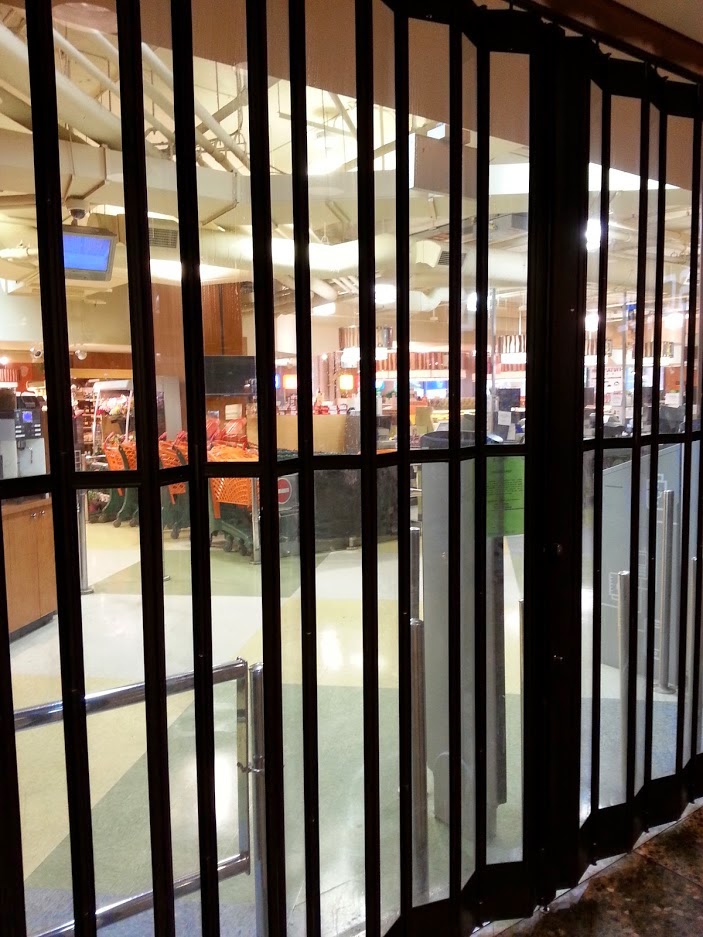 It was fun to be there to catch the spirit.  I understand why an English speaking resident of Montreal, although a minority, said that there's no where else he would rather live!

Posted by Susan Richards at 6:31 PM No comments: Links to this post