As a member of San Diego Book Arts, http://sandiegobookarts.org, I wanted to paticipate in the upcoming cARTalog exhibit, which will travel to five San Diego area libraries from July 2007 through January 2008. The concept started with the University of Iowa. Thousands of cards from now-retired card catalogs were sent across the country with an invitation to create works of art from them. Of the cards distributed by San Diego Book Arts, this one, as it were, is the hand I was dealt. The synchronicity of this card finding me is beyond words. I completed the year of saying Kaddish (the prayer said in community as part of Jewish mourning practices) for my mother only a few months ago. The process was transformational in ways I could not have forseen.

Like the just-right writing prompt, this library catalog card opened an unexpected door for me. I am led to a new series of work called "Cherish Each Day," which views the simple, the ordinary, the everyday, through a new lens. My mother loved music - it was the last thing that remained with her. To be given a card of a record - this record, of Leonard Bernstein's Kaddish Symphony, - was magical.
Posted by Susan Richards at 4:51 PM No comments: Links to this post I was happy to receive the Juror's Choice Award at the Women's Caucus for Art/San Diego exhibition, "An Open Book", juried by Dorothy Annette of BorelliSpace. I am sad that the piece, "The Dow is Up" was triggered by a newspaper photo of a grieving Iraqi mother. The overlaid transparency creates a halo effect above her head...an Iraqi Pieta...
Posted by Susan Richards at 12:36 PM No comments: Links to this post 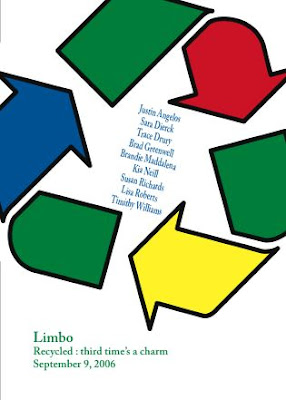 "Recycled: third time's a charm" at Limbo Fine Arts, www.limboarts.com, in September 2006, was a very exciting show to be part of, and was close to my heart on every level. I was happy to be among other artists who make use of flotsm and jetsam and funky found objects, - literally recycling. Then there is the recycling of experience. Pain? Make art out of it. Joy? Make art out of it...
Posted by Susan Richards at 8:17 PM No comments: Links to this post