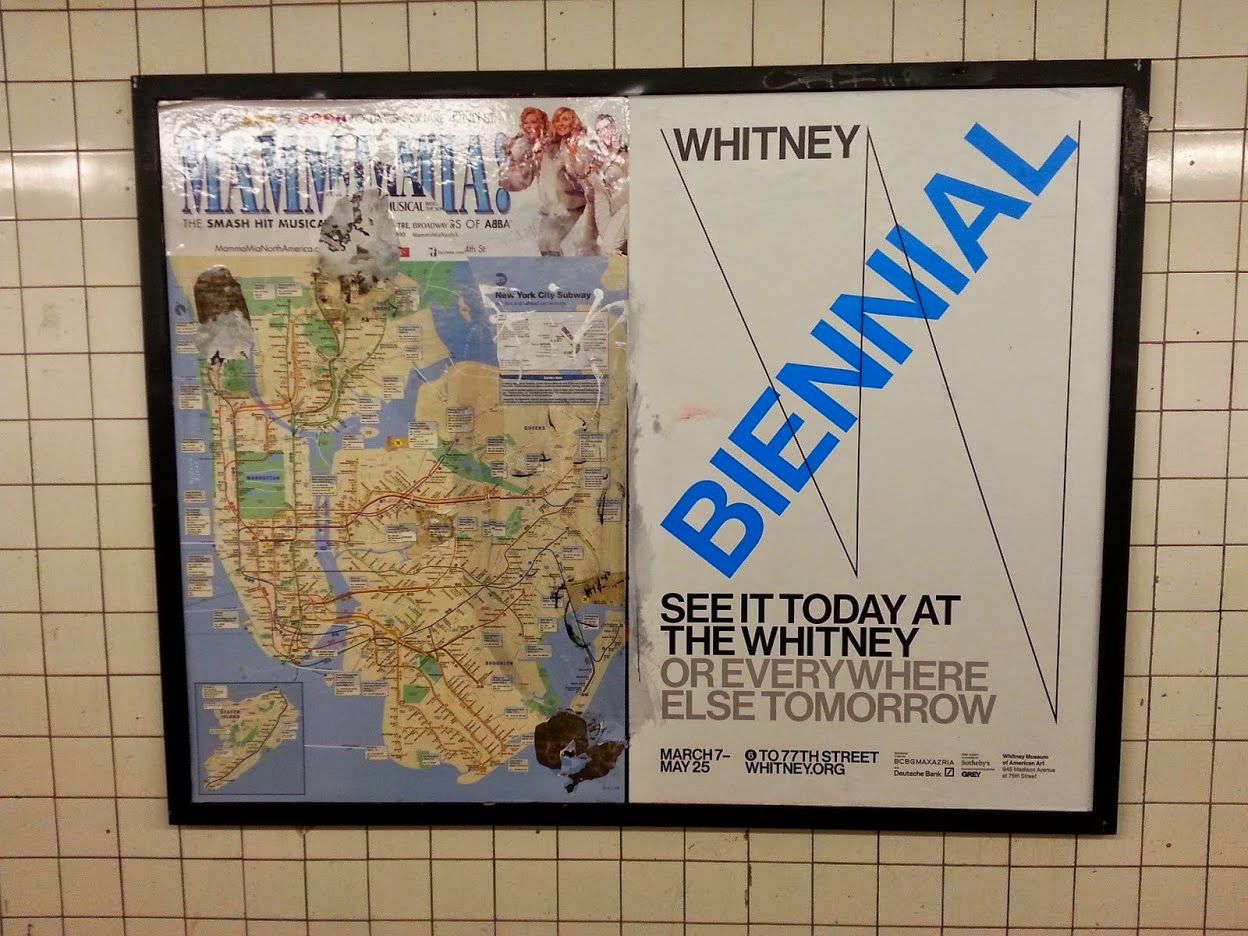 Dubbed  "A Last hurrah at the old Marcel Breuer ziggurat before the Whitney goes full bridge-and-tunnel in the Meatpacking District" by Village Voice reviewer Christian Viveros-Faune,  the Biennial's posters were all over the New York City subways.  Another reviewer called the show a eulogy for the old building.

Here are some of my favorites from my visit last Friday.  I've been a long time fan of David Wojnarowicz (1954-1992) a painter, photographer, writer, filmmaker, performance artist, and AIDS activist who was prominent in the New York City art world.  I had seen photos of his Magic Boxes, but seeing an actual one in person was very touching, and made me appreciate his kinship with https://dumpsterdivers.org/.  Random (or not so random) junk can convey such intimate meanings. 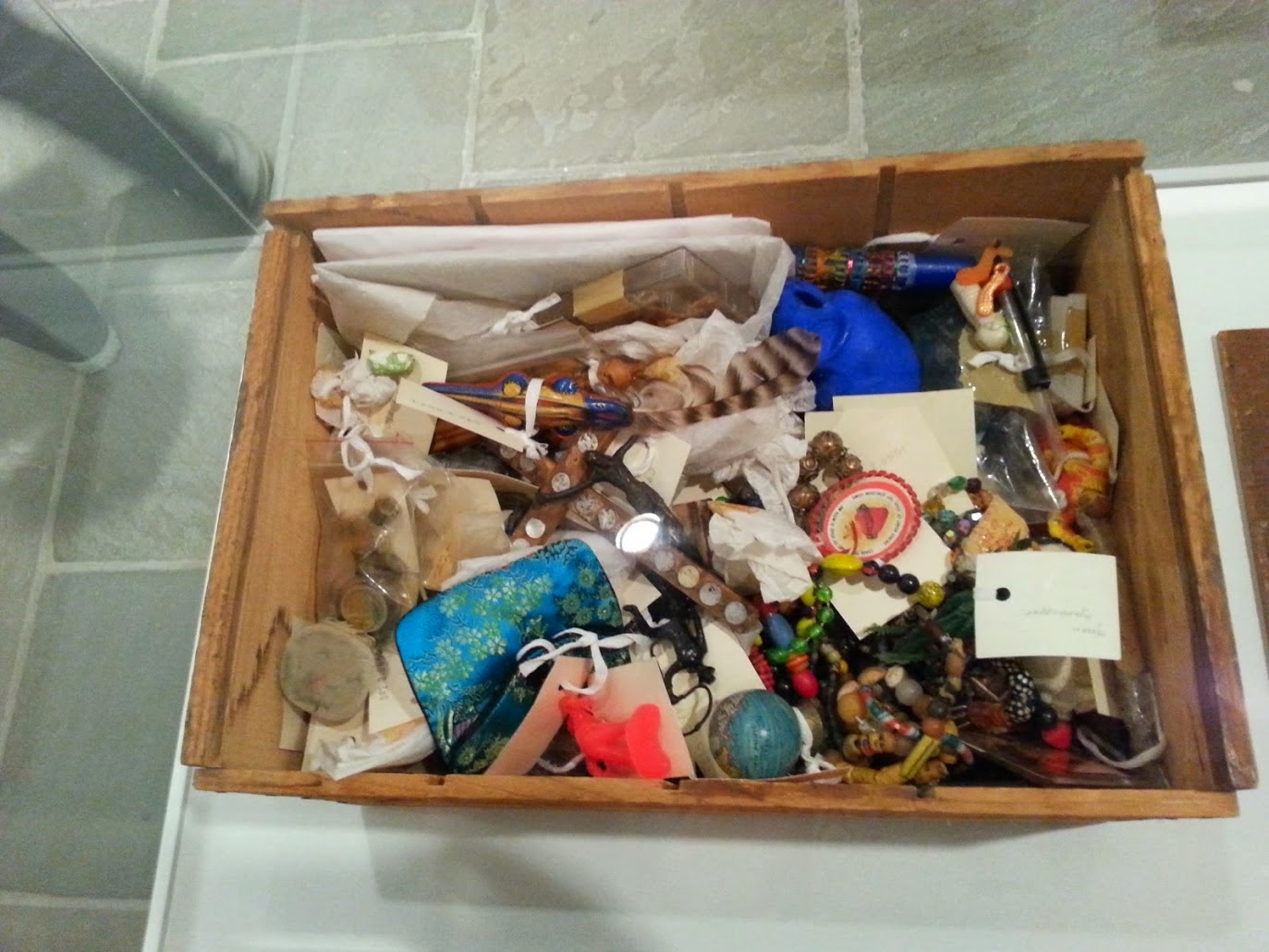 His 1989 calendar page was also exhibited.  People's handwriting carries their spirit and energy in a way that the digitized world never will.  Here Phil's Birthday seems to have the most importance, with it's red arrow and star, while Act Up's City Hall Court date, the picking up of film, delivery of art work, and meeting with filmmaker Mike Kuchar are part of his daily life.  It's good to know that all Wojnarowicz's stuff is now housed in a Special Collections Library at New York University. 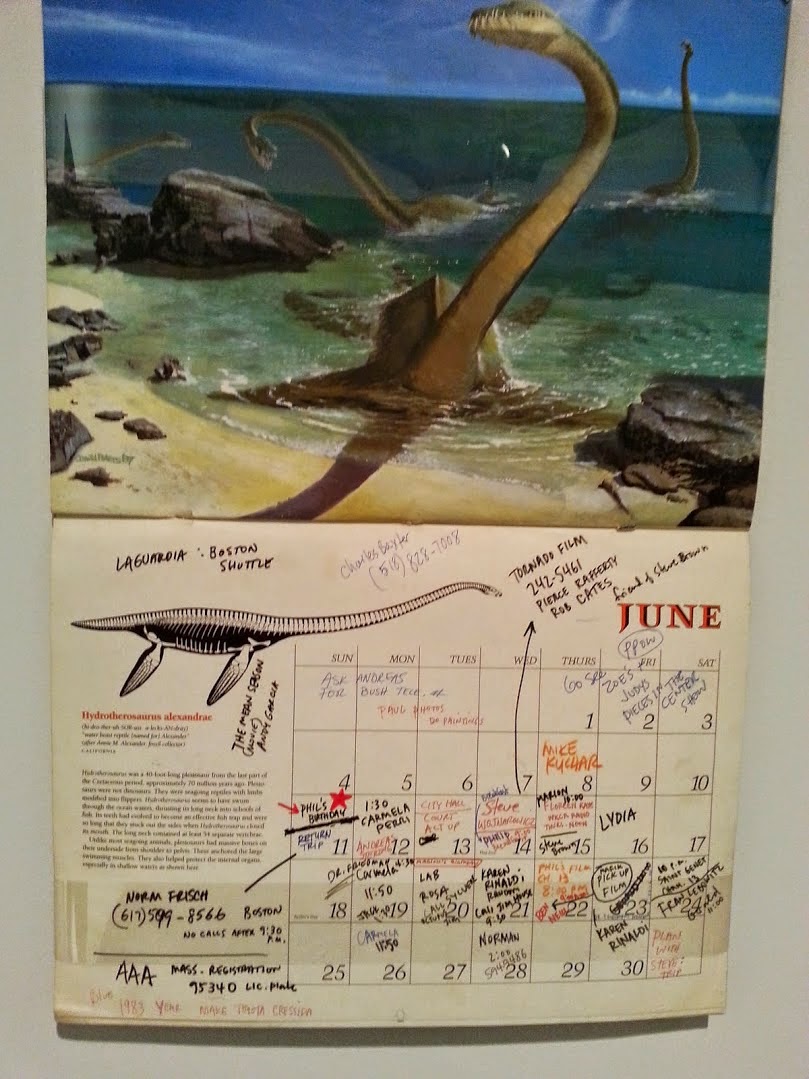 Here is an amazing ceramic tile wall by John Mason, with one of his ceramic sculptures in front of it.  I was glad the Biennial included a lot of work in media often considered "craft." 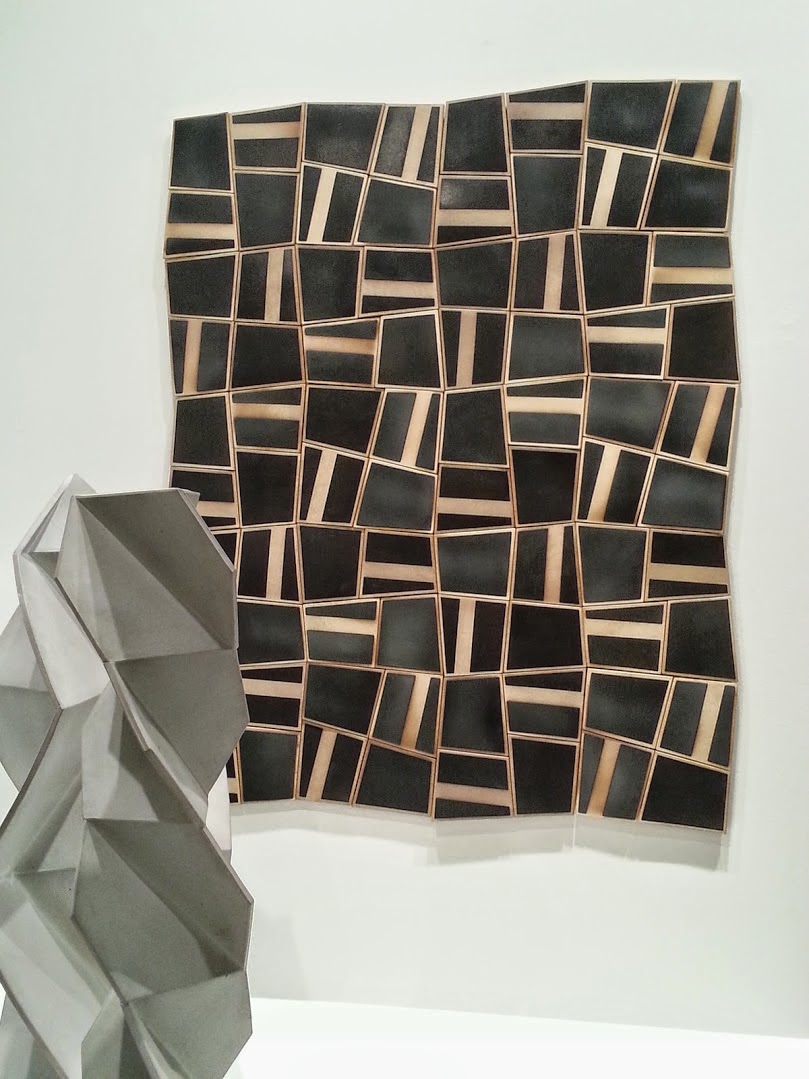 All kinds of student groups were there, this one in front of a colossal Sheila Hicks installation: 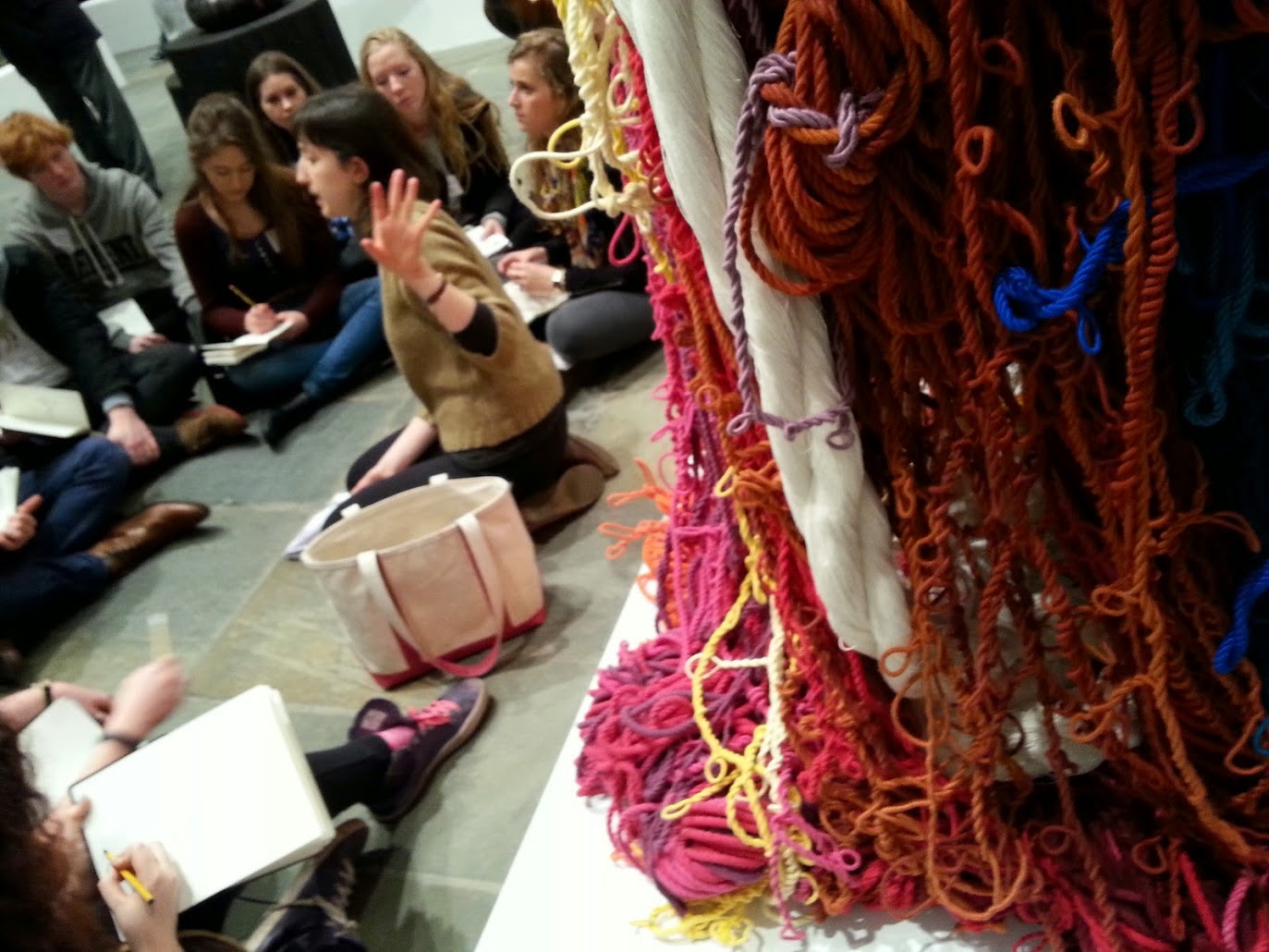 The piece below caught my attention because I had just been at the American Visionary Art Museum, a museum of Outsider art,  a few days previously, http://www.avam.org/.  It was confusing.  Which museum did it belong in?

It is by James Benning, After Howard, house paint on plywood.  When I looked  up James Benning I discovered that he is an independent filmmaker with an MFA.  He also does visual art work that overtly copies Outsider artists he admires, this one copying Jesse Howard (1885-1983).  Critic Roberta Smith says "The ...Benning copies establish him as a graphic ventriloquist, able to seamlessly inhabit the sensibilities of other artists."  I guess that explains why it is in the Whitney Biennial, and not the American Visionary Art Museum. Hmmm. Something about that annoys me.  Jesse Howard is unlikely to have an estate that will question the legality of this and all the ensuing copyright and financial issues.  Why is outright plagarism being given a place of honor at the Biennial?  It is not an honoring.  It is slick stealing.

This one below was fascinating,  and also felt like it could have been at the Visionary Art Museum, especially in its current exhibit about obsessive-compulsive disorders in Outsider artists.  "Peter Schuyff makes the carvings on view in the Biennial by holding a knife in place and rhythmically moving a pencil along its edge—all without looking at what he’s doing. This practice functions as a meditation that the artist engages in when he tires of working on the geometric abstract paintings for which he is perhaps better known." 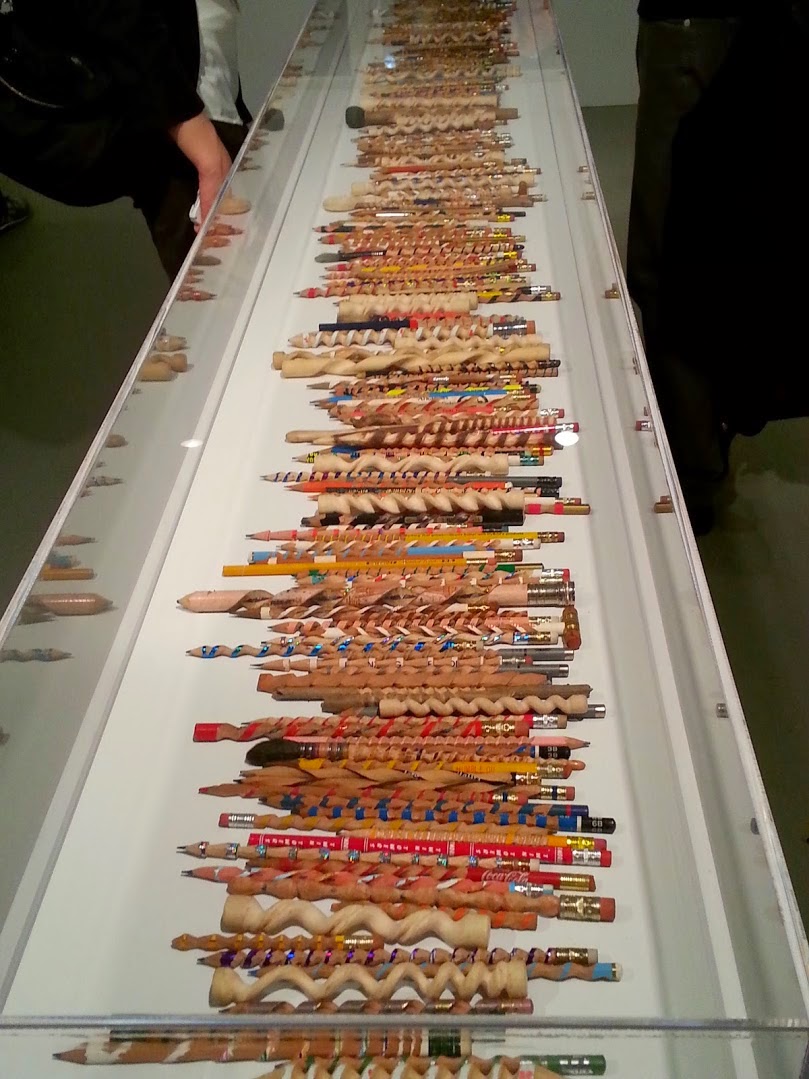 So, he's not self-taught, he does other stuff, and is definitely not an Outsider.  His carved pencils are mesmerizing!

The photographic series Relationship by Zackary Drucker and Rhys Ernst was beautiful and poignant. "The photographs... are an intimate and diaristic record of their relationship as a transgender couple whose bodies are transitioning in opposite directions (for Drucker from male to female, and for Ernst from female to male). As both subjects and makers of these photographs, Drucker and Ernst engage various elements of self-fashioning, representing themselves in the midst of shifting subjectivities and identities—making images that are simultaneously unguarded and performative, an extension of their narrative filmmaking practice."  We were fortunate to also view their collaborative film, She Gone Rogue.  (photo below by Drucker and Ernst). 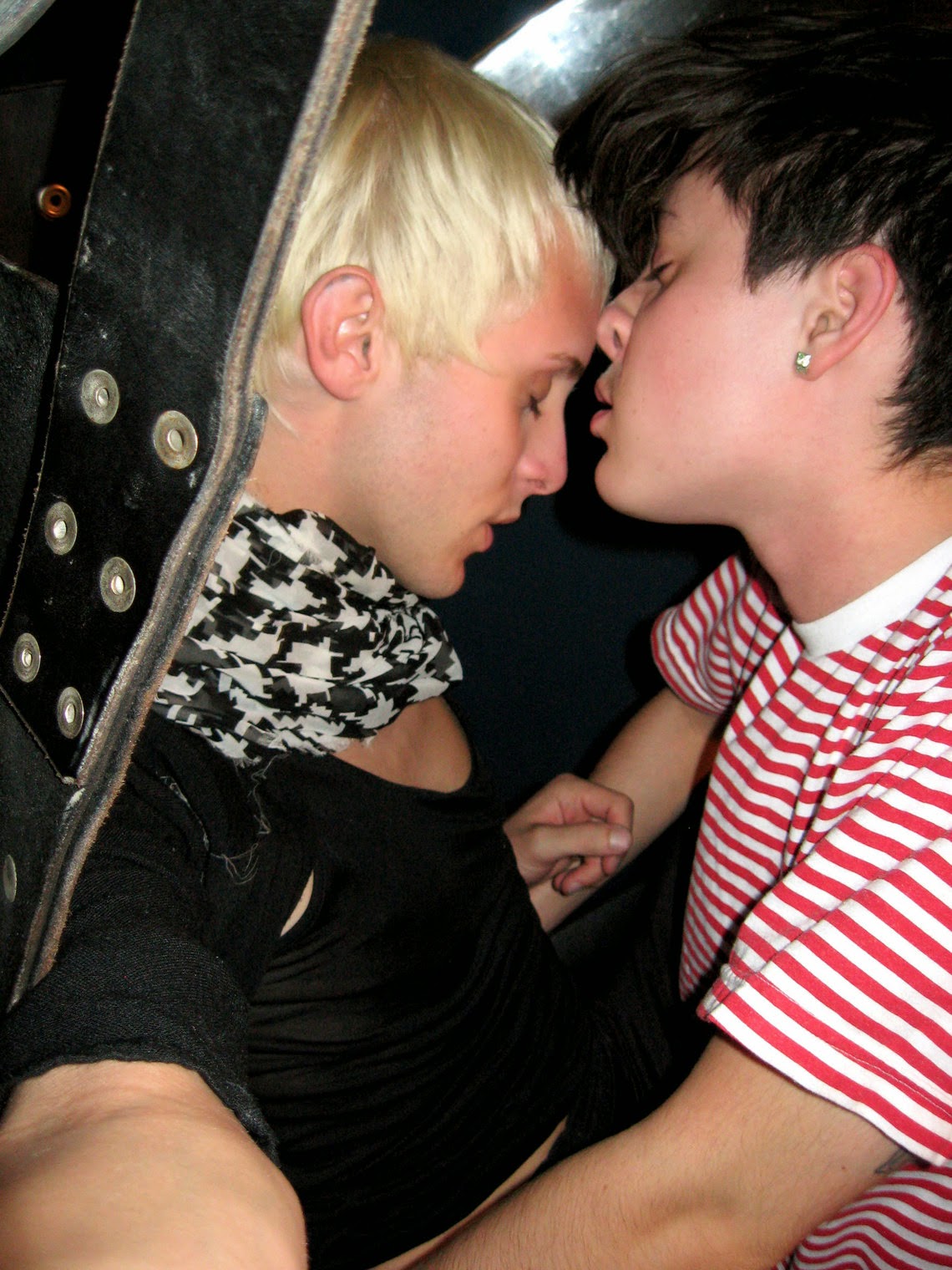 Much of the exhibit felt like a rarefied class, a unique curriculum that demanded reading of all the wall commentaries (impossible in just one visit.)  When I saw a mom pushing a stroller with a very cute infant, I smiled at the baby and said, "you are the best work of art in this exhibit!"  The mom smiled back and said, "she isn't trying to understand anything."

Posted by Susan Richards at 1:51 PM No comments: