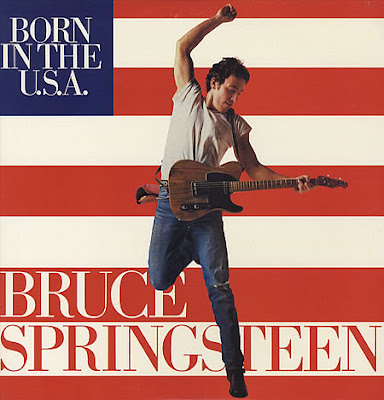 "It's a meditative trance, scraping the top of your subconscious with a knife.  The shavings may be a song.. "  That's  Bruce Springsteen, describing his songwriting creative process.  We were at the National Constitution Center today on Independence Mall, the same Mall that houses the Liberty Bell, to see The Life and Music of Bruce Springsteen, an exhibit organized by the Rock and Roll Hall of Fame.


In the 80's when Springsteen hit it big I was too stuck in classical music to listen to Rock and Roll.  Now in retrospect I appreciate what I was missing!  More touching to me than seeing his guitars or his motorcycle, the photographs or the posters,  were the dozens of lined spiral notebooks with handwritten songs.  They speak to a creative genius whose poetry couldn't stop pouring out.  Sometimes there were crossings out. More often, the pages were uncorrected.

Listening with headphones to an old radio interview, I was awed to hear him describe his creative process.  After the meditative trance phase, came the craft - the refining again and again, with discipline and persistence.  He said 95% of it didn't come to fruition, but when the 5% is something like Born in the U.S.A., the 95% percent fades away and all the work doesn't matter.

I am struck by the similarity of the creative process, across genres, across mediums, across time.  I am grateful to the friends who wanted to see this exhibit with us.  Otherwise we wouldn't have gone and I would have missed out. Now I await the CD compilation of his work they are sending us!

Posted by Susan Richards at 4:19 PM No comments: