A Synagogue in a Prison? 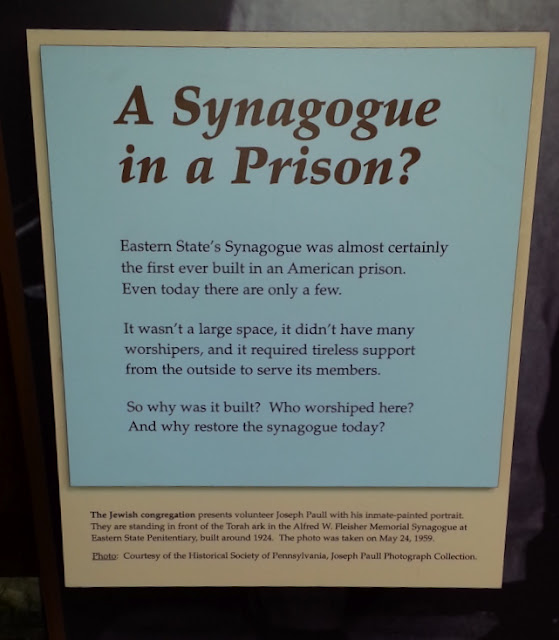 We visited Eastern State Penitentiary in Philadelphia today thinking it would be a fun outing with our niece.  I didn't know there was a synagogue in it.  Nor did I guess how unexpectedly moving it would be. 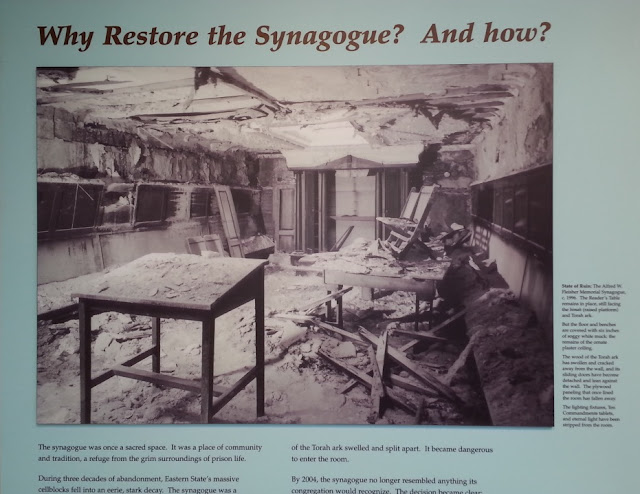 Eastern State closed in 1971, and today is a big tourist attraction in a state of 'stabilized ruin', "a haunting world of crumbling cellblocks and surprising eerie beauty."  This wreckage of the original synagogue is pretty much what the interior of the cells looks like, though of course much smaller.  In 2004 "the decision became clear:  save what could be saved, learn what could be learned, and carefully piece this sacred place back together." 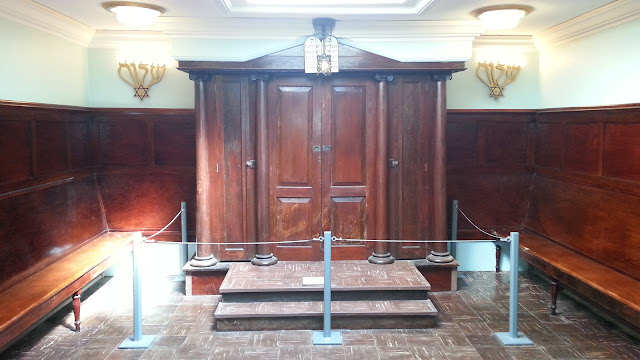 There is even a side room with a basket of kippot (skullcaps) on a table as if about to be used: 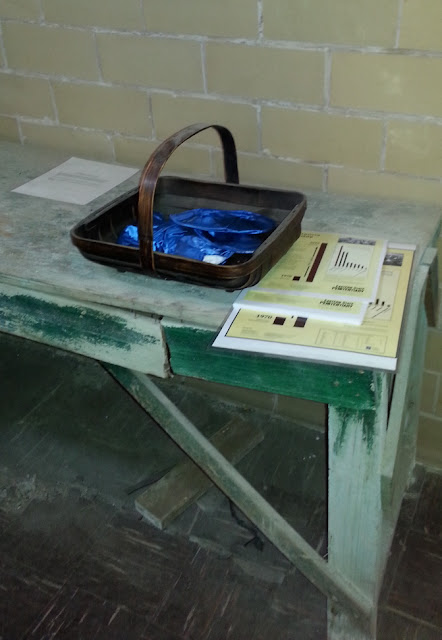 In the Exhibit on Jewish Life, there was a video of the Rabbi who was the visiting Chaplain talking about bringing in special kosher foods for Passover.  Here they are holding a Seder in the Synagogue.  The inmates feasted on all the traditional delicacies so foreign to their normal fare, with enough leftovers to take back to their cells to share or barter with the non-Jewish prisoners. 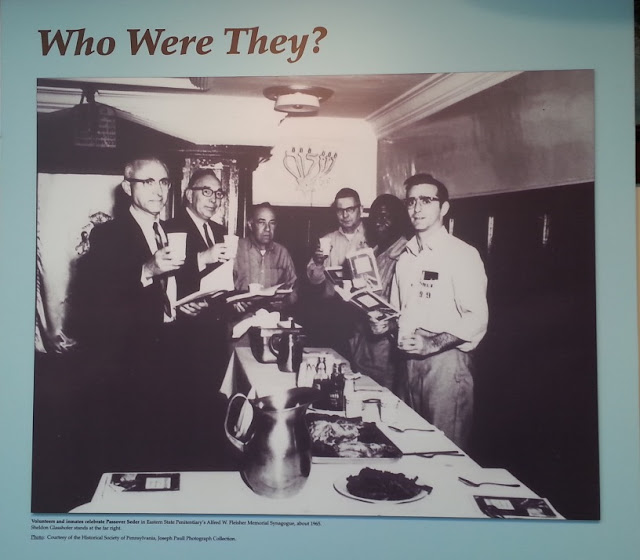 Sheldon Glasshofer also spoke on the video, about how they got to together at Seders and discussed the Passover story, as Jews everywhere always have.  Except that these Jews were discussing a holiday of freedom and liberation from inside a prison. 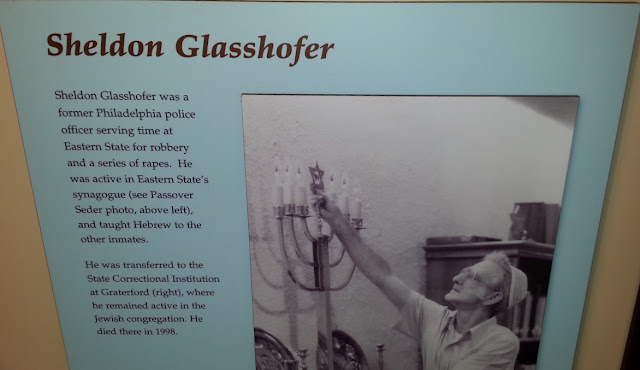 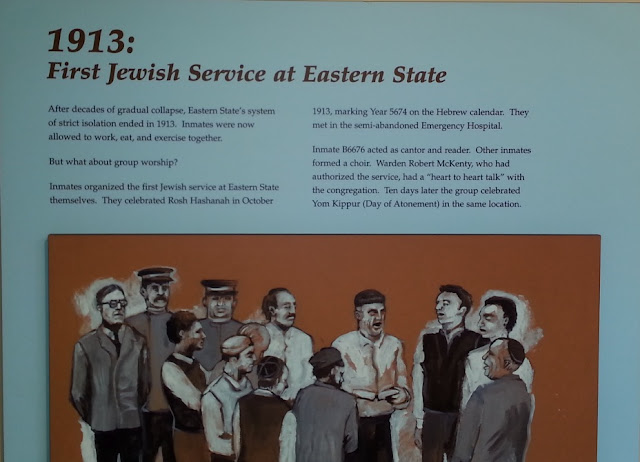 Weekly Shabbat services were added by 1917, with much support from the Philadelphia Jewish community: 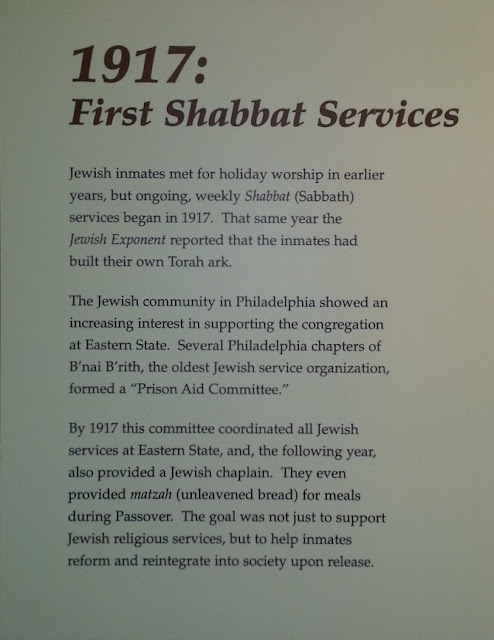 It's remarkable the extent to which the prison administration accommodated to Jewish ritual and custom, and for such a small percentage of of their population. The Synagogue skylights were even opened up at Sukkot, turning it into something of a virtual sukkah.

Perhaps it helped that the President of Eastern State's Board of Trustees was Alfred Fleisher.  After his death The Alfred W. Fleisher Memorial Synagogue was named in his honor. 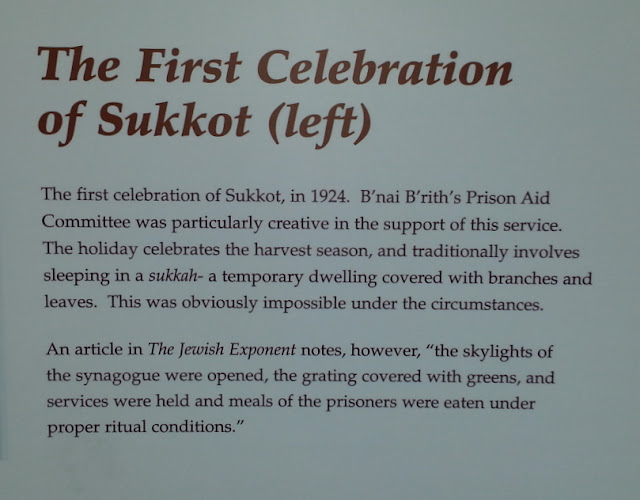 The original synagogue door is carefully preserved.  You can see the "ghosts" of the two Stars of David on the upper panels: 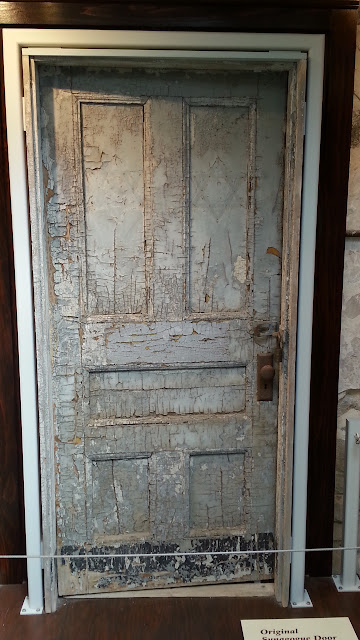 The mezzuzah  currently in use on the doorpost is a reproduction: 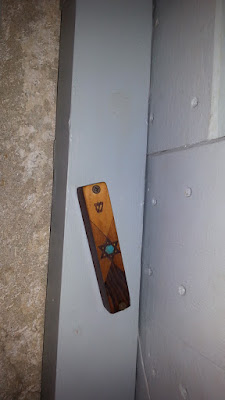 It was touching to see that the local Jewish community is obviously still active in both preserving and teaching about this unusual history.  The invitation to fill out cards about both good deeds done or good deeds done for you were filled out and posted by children who had visited from all over the world. 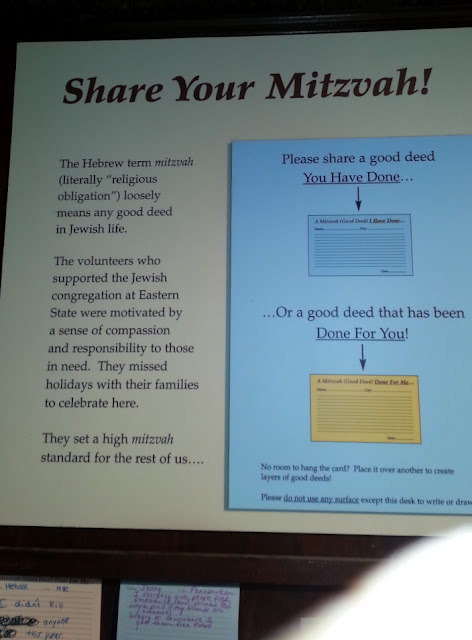 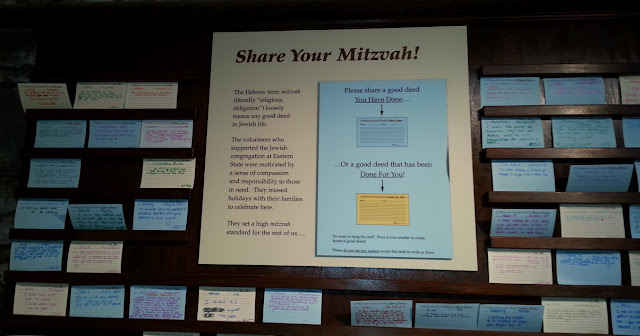 I'm glad we visited Eastern State Penitentiary, and I'm surprised and touched to have visited both the synagogue and the accompanying exhibit on Jewish Life in the prison.  People talk about the "ghosts" in Eastern State, and Halloween season is their time to stage a massive haunted house.  I don't know about ghosts.  I know I felt the presence of this unusual congregation who together with many volunteers from outside the walls made this space very sacred. 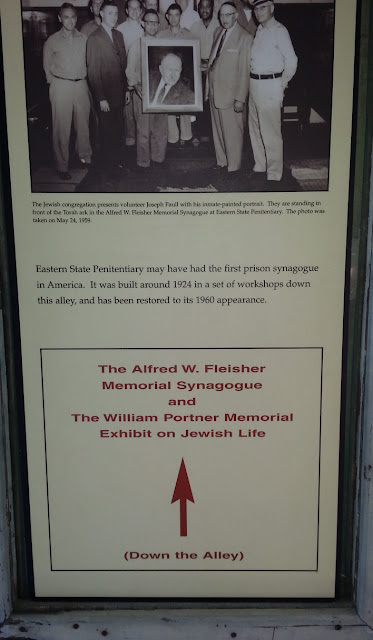 Posted by Susan Richards at 3:00 PM No comments: Links to this post