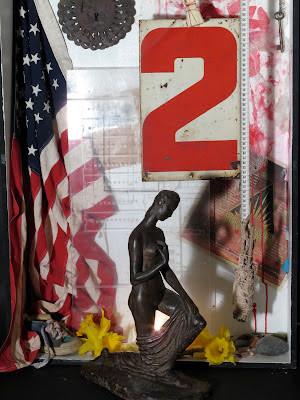 "Ensembles" were what Dr. Albert Barnes called his unique juxtapositions of paintings, metalwork,  and decorative arts from different periods, cultures, and styles.  He was obsessed with arranging and re-arranging his ensembles, which were in such marked contrast to conventional museum groupings by era, artist, and area.  We visited the Barnes Foundation in its new Philadelphia incarnation today, in the first week of its much heralded opening.  http://www.barnesfoundation.org.  The old galleries from the Merion campus dating from 1922 are faithfully reproduced within a modern building, tied together with beautiful landscaping, modern climate control, additional amenities and spectacular natural lighting that makes people familiar with the old galleries think the paintings have been cleaned. (They haven't - the colors just sparkle more).

The ensemble concept feels so natural to me.  My mother loved her reproduction of Wilhelm Lehmbruck's Kneeling Woman (above), now mine.  The original is over life-size, but I grew up with this copy and love it in reduced scale.  Mom would juxtapose it with a pitcher whose spout and handle echoed the curves of the Kneeling Woman's body, or the samovar, whose shape complemented the scupture's.  My mother was naive about what she was doing, but she would have felt right at home with Dr. Barnes' ensembles.  She would have loved how he paired particular Pennsylvania Dutch chests under specific paintings, with pottery on them that complemented the Matisse or Renoir or Cezanne above. 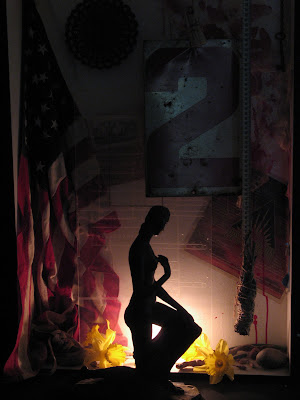 Before we moved, I photographed the Kneeling Woman inside my assemblage which I later took apart because the box was too heavy to move across the country.  The pieces will be recycled into new work.

By the time we got home this afternoon, I was exhausted.  I decided to lay down and watch the netflix video that I hadn't had time to watch for over a week,  !Women Art Revolution, a film by Lynn Hershman Leeson, even though it didn't seem quite in keeping with a Barnes day.  "Through intimate interviews, art, and rarely seen archival film and video footage,  !Women Art Revolution reveals how the Feminist Art Movement fused free speech and politics into an art that radically transformed the art and culture of our times."  After watching, I looked at the films's website.  It turns out it was selected and screened by the Museum of Modern Art, New York, as one of the three best documentaries of the year in 2011.  http://www.womenartrevolution.com.

I tried to remember if I had seen any women artists at the Barnes, in any of my visits.  Maybe one Mary Cassatt?  What I do remember from the additional new exhibition gallery now displaying the history of the Foundation, was a typed letter by Dr. Barnes bemoaning that all the male students were off fighting the war (WW II), leaving only female students at the Foundation.  The tone of his wording left no doubt that he felt women were less desirable as students.  No criticism here,  just an observation - he was a product of his era, no matter how visionary. 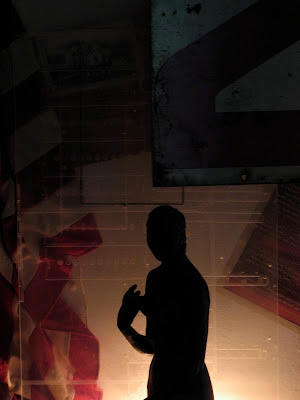 What is the relationship between my Barnes experience this morning and watching the video of !Women Art Revolution this afternoon?  The ensemble concept expands your way of seeing and thinking, about life as well as art.  Juxtapositions matter.  The Impressionist, Post-Impressionist and early modern artists that Barnes collected, his contemporaries he often came to know personally, were rejected and misunderstood in their day - as was he as a collector at the time. He remained bitter about this the rest of his life.  The Feminist artists were rejected, ridiculed, and misunderstood in their day as well.  There is a resonance in the belated recognition of the historical importance and contribution of both Barnes' unique genius and the Feminist Art Movement.  Peter Schjeldahl ends his New Yorker review of the new Barnes saying "The Pharisees of proper taste deemed Barnes weird for his fanatical orchestration of artistic stimuli.  In truth, he was crazy like a prophet."  The movie makes clear that the Pharisees of proper taste kept the Feminist Artists out of traditional museums and galleries and did their best to render them invisible.  Yet we now see how prophetic they were in the ways they have influenced generations of younger women artists.  It was an ensemble day in a way I could not have foreseen!

Posted by Susan Richards at 6:50 PM No comments:

Ode to New York from back home in Philly 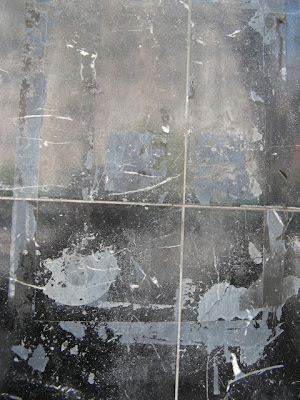 I learned from the Whitney Biennial that if I was the kind of artist that would reproduce this snapshot of a West Village wall (and the other shots like it) on 7 foot aluminum slabs, or on huge pieces of massive wadded canvas  it would be considered art.  Since I just post it as an album of interesting snapshots on Facebook, it is nothing much...

It was a new experience, showing my Barnes Foundation student ID at both the Guggenheim and the Whitney, and getting in free.  I learned a lot from John Chamberlain's historic retrospective at the Guggenheim.  I had heard about John Chamberlain just starting to weld automobile parts together back when I was a high school student in an adult art class with Jason Seley.  I still think of him as Mr. Seley - would talk about his friend John Chamberlain.  I had no idea the significance of it...  Fifty years later the significance is apparent now to all.  Chamberlain was involved in curating the show, but sadly died before it opened.

I'm not sure what I learned from the Whitney Biennial.   The little video on curatorial choices didn't answer my questions about it....  Some of the choices seemed like the emperor has no clothes.   I had felt peer pressure to see it.  Everyone I knew had either already seen it, wanted to see it, or thought they should see it.

Pulse Art Fair was a glimpse of the art business, the industry, except for a couple of organizations that mentor emerging artists who had booths there.  I think I was too tired by that time to do justice to seeing past my first impression that some of it was commercial art masquerading as fine art.

On leaving, I stumbled into boxes of what seemed to be art books being put out as trash on the sidewalk.  They were mostly Sotheby and Christies catalogs, now trash because the auction had already taken place. Sadly, someone's carefully (and expensively) prepared portfolio was also included in the trash. It was heart-wrenching;  truly a New York moment. The man trash-picking next to me said in his British accent, "This would never happen in London."

Pulled Into a Vortex 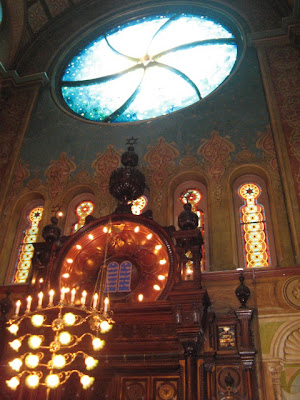 I wanted to see the famous glass window that Kiki Smith designed for the Eldridge Street Synagogue. There was a lot of publicity when she was awarded the commission, and even more when the window was installed in 2010. As it turned out, the Museum at Eldridge Street was a visceral experience of the  Ashkenazi Jewish immigrant experience on New York's Lower East Side (now Chinatown).

The window pulled me into its unexpected vortex.  Now I want to experience the sanctuary in the winter time at dusk when all the stained glass casts turquoise light.  Despite the need for the major renovation, of which the Smith window is the crowning piece, eighty-five percent of the stained glass is the original. 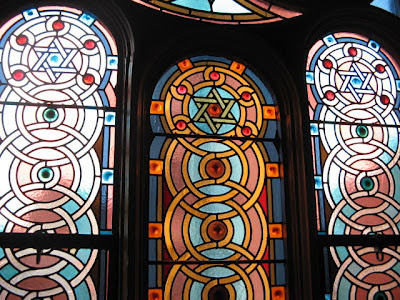 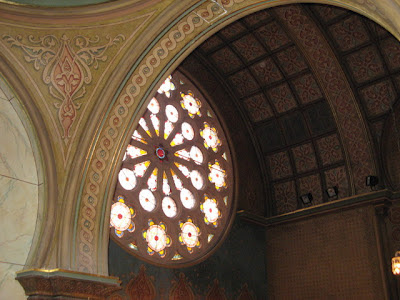 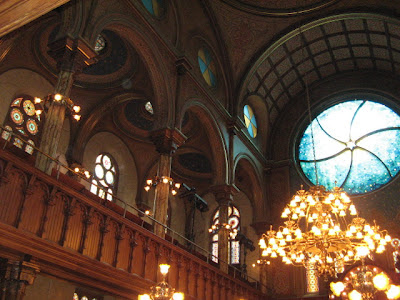 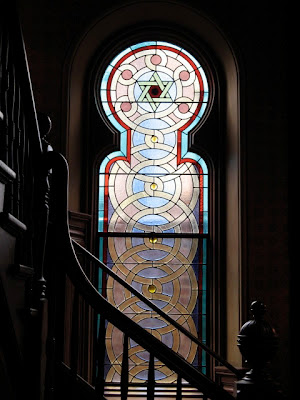 The ark once held twenty-four torahs and now is empty.  The carving on its doors and the surrounding lintels is majestic. 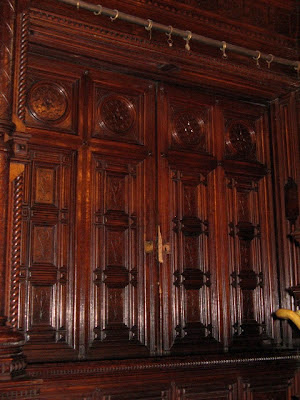 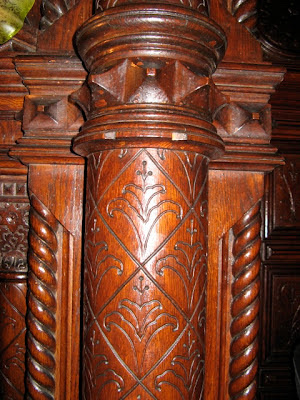 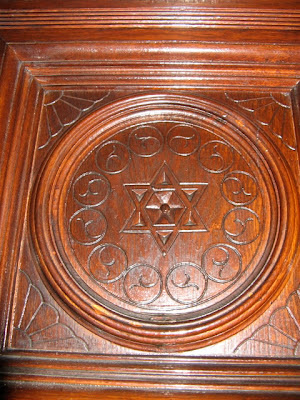 Our guide helped us imagine what it was like for working class families living in crowded tenements to step into this grandeur.  No wonder it was the social center of the community, the home away from home.  It was the custom for men not to wear a tallit (prayer shawl) until they were married.  That way the young women could spot the eligible bachelors from their perch in the women's balcony.  The women's balcony felt very intimate, and a wonderful vantage point.  Because of the way the bima (podium) was facing, the women had a better view of the unrolled torah, than the men who were on same level with it. 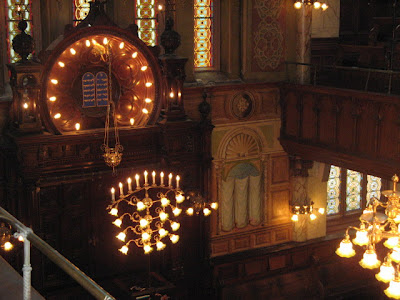 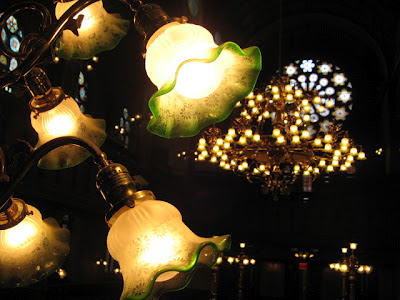 They left one wall showing how it was before the renovation. 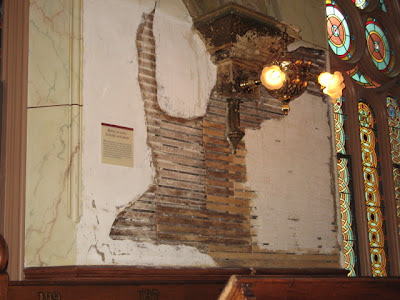 Now a mixture of old and new... 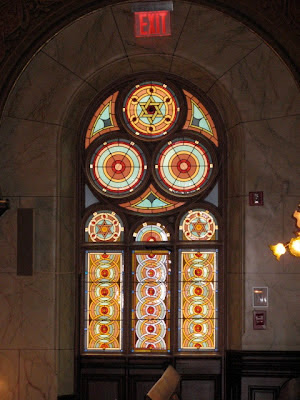 Thank you Kiki Smith, for pulling me into the vortex. 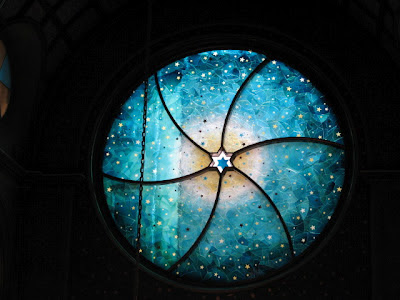 Posted by Susan Richards at 4:50 PM No comments: