Good Friday Then and Now 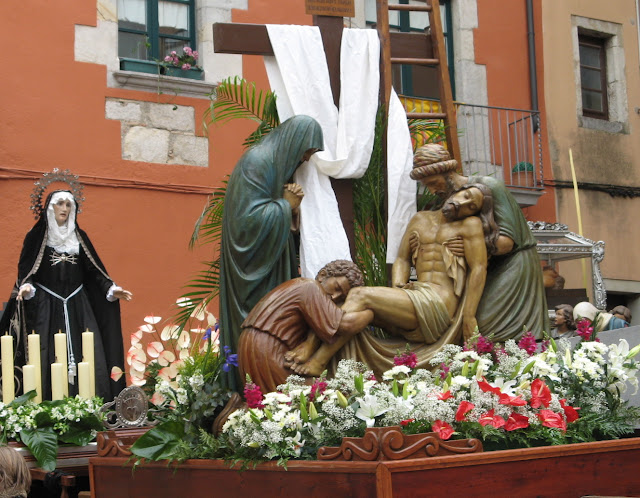 These passionate floats were lined up in a plaza in Girona, Spain on Good Friday 2008, waiting to be in procession on Easter. 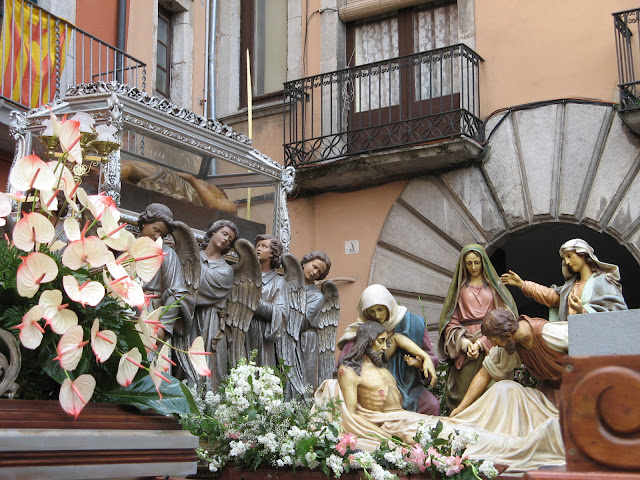 We were there with a Jewish history tour of Portugal and Spain.  I was looking for a glimpse of La Convivencia, "The Coexistence," the past time when Jews, Muslims and Catholics not only got along, but experienced a rich and deep cultural interplay.  It did fall apart, but it did also exist.  What might we learn from La Convivencia?  That insight is more urgently needed now in 2016 than it was in 2008. 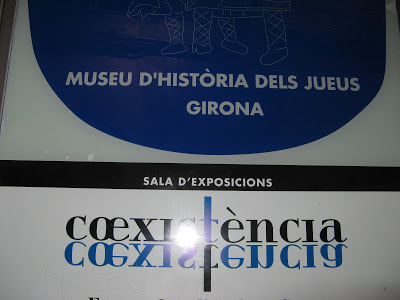 This Museum of Jewish History in Girona is around the corner of the plaza where the floats were.  We got there fifteen minutes before it closed early for Good Friday.  The employees were Catholic, and were being given time off for the holiday.

As it is this year, in 2008 Purim was close to Easter.  The previous evening, some of our group had gone to the synagogue in Barcelona to celebrate Purim.  They reported a festive time, enclosed in careful security.  The men were instructed to remove their kippot, (skullcaps), upon leaving - that is, to remove overt signs of being Jewish.  The group was told to disperse quickly afterwards, or go back into the building while waiting for the bus.  Historically, Good Friday had been a time for attacks on Jews, accused of being Christ-killers. 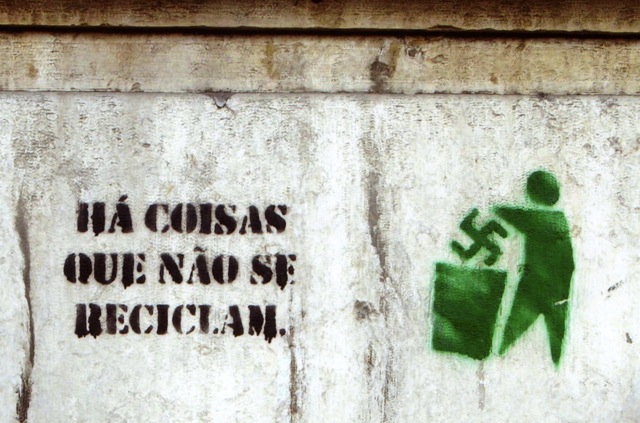 We saw this stencil repeated on many walls in the city, urging rejection of fascism.  It made the Good Friday anti-Semitism  feel visceral, especially when I saw the one where someone had scratched a fresh swastika. 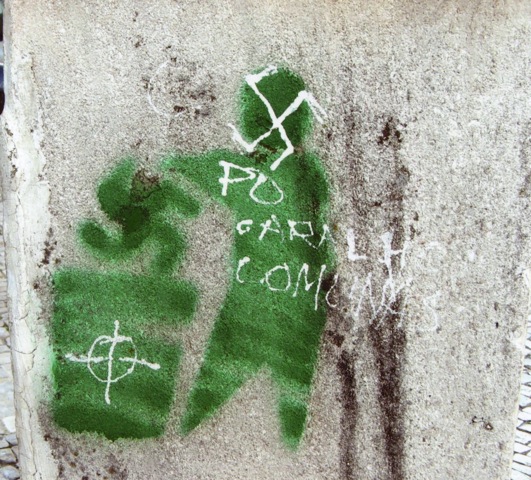 Also disturbing was this costume, seemingly connected with an Easter ritual. Who are the Hermanidades? 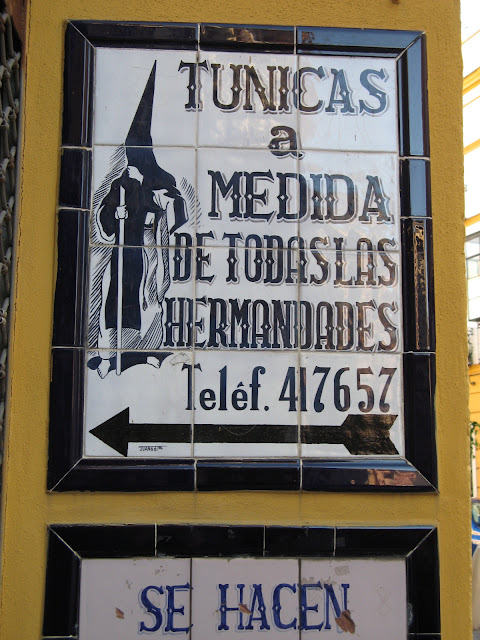 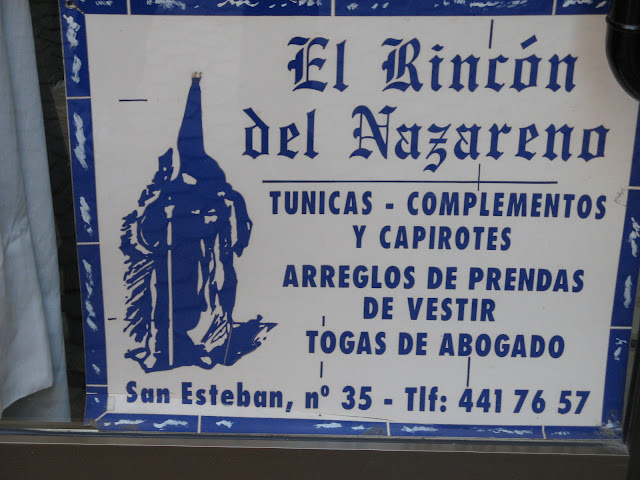 All I could think of was the KKK.  I have no idea where their costumes originated.  But what is this medieval Spanish tradition which persists? 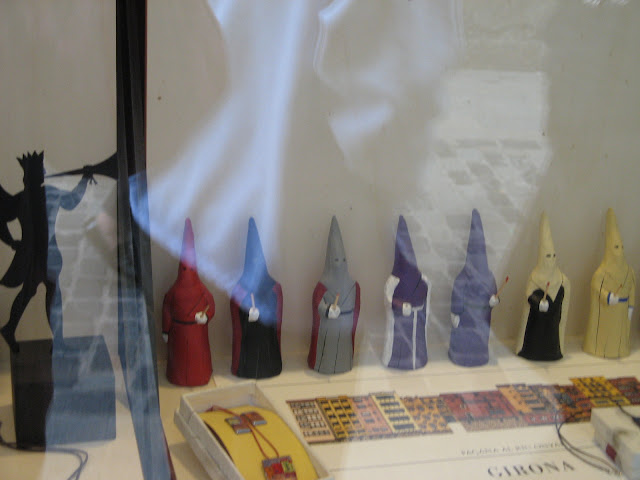 If resurrection really does follow Good Friday, then may we all rejoice in the renewal of nature at this blossoming season, and experience a blossoming in our hearts towards each other, including towards the millions of refugees and immigrants, displaced by violence, war, and oppression around the world. 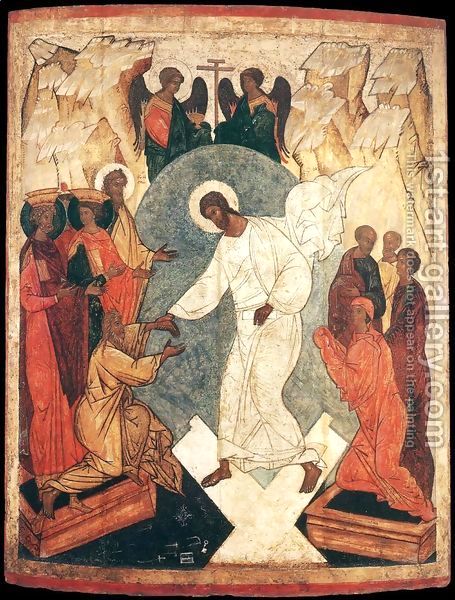 Posted by Susan Richards at 2:28 PM No comments:

The Spirit of Jose Marti 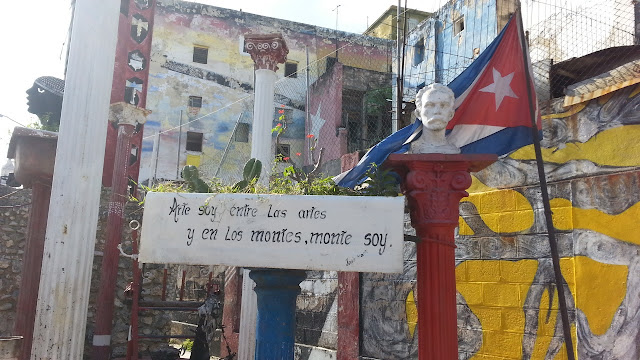 This corner of hommage to Jose Marti, the "Apostle of Cuban Independence" is in the Callejon de Hamel, the center of Afro-Cuban Santeria religious traditions in Havana.  As only art can, it conveys the reverence for his spirit. 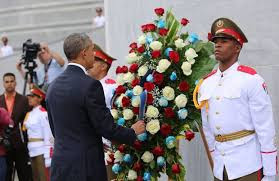 My group arrived in Havana on January 30th, 2016, two days after Jose Marti's 163rd birthday. Freshly back, I have been moved by President Obama and his family's visit to Cuba. (I just found out his mother-in-law was along too.  I think the Cubans resonate with three-generation families.)  I have read and saved the text of Obama's momentous speech that was broadcast on Cuban television today, and around the world. 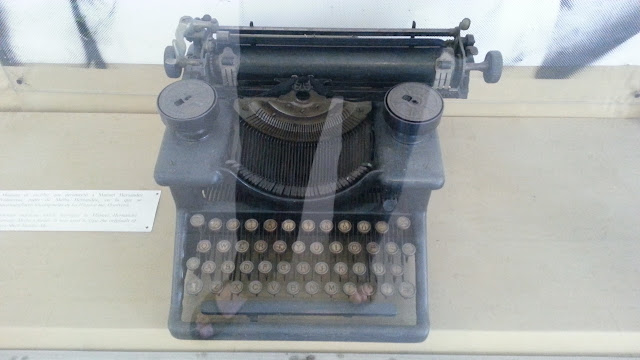 This is the typewriter in the Museum of the Revolution in Havana on which Fidel's famous "History Shall Absolve Me" speech was typed.  Today, Obama's speech is archived forever in every possible media format.  Last I looked, it wasn't posted yet on YouTube, but it will be.

What a great statesman he will be in his post-presidency.  Today, on Cuban national television, he said (among other things) that both countries needed to do more to overcome racism due to a history of slavery - something promised in both countries, but far from achieved.

The Callejon de Hamel was fascinating, not only artistically, but also because of its honoring, cherishing, and practicing of African traditions, now become Afro-Cuban. 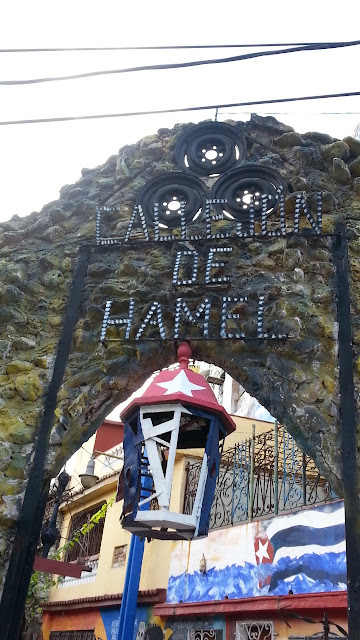 I can't resist sharing some of the more striking images from the Callejon: 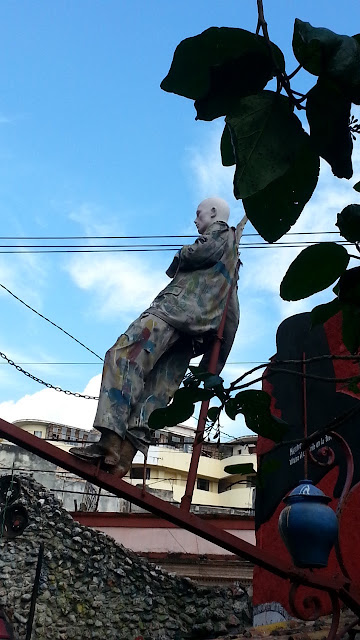 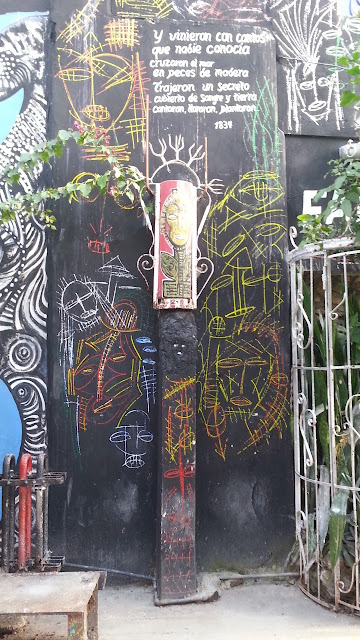 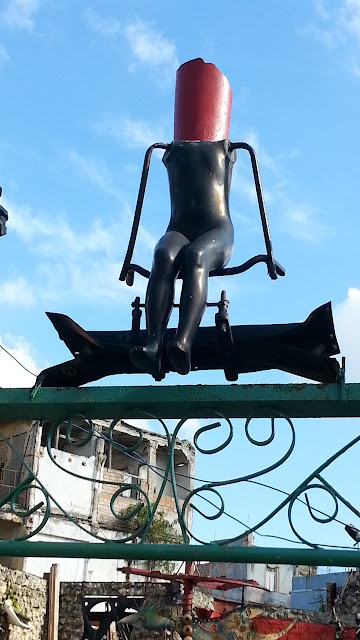 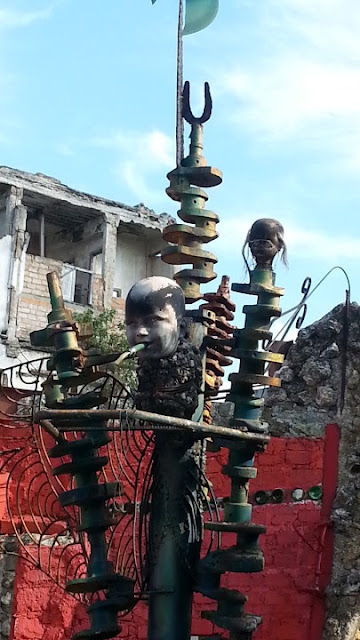 This was the most amazing though, in the Santero's art studio: 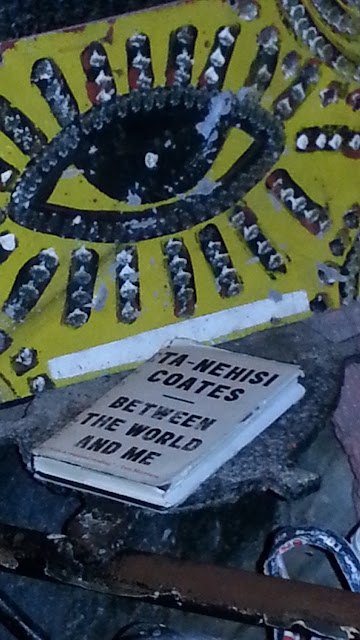 Our guide was reading it.  It turned out he was getting his Masters degree at the University of Havana and writing his thesis on why the revolution did not bring an end to racism. The quintessential 21st century Santero!  And today he could watch the president of the United States - a Black man, speaking in Havana - say that there was racism in both countries which needs to be addressed.

I thought my interest in Santeria was intellectual curiosity.  I found this painting of Elegua, an Orisha, or spirit in the Afro-Cuban Santeria tradition, in a market.  No other Orishas were available.  And only one of Elegua.  It found me. He is master of the paths, crossroads, and gates of this world.  Now he hangs in my studio and remains a presence. 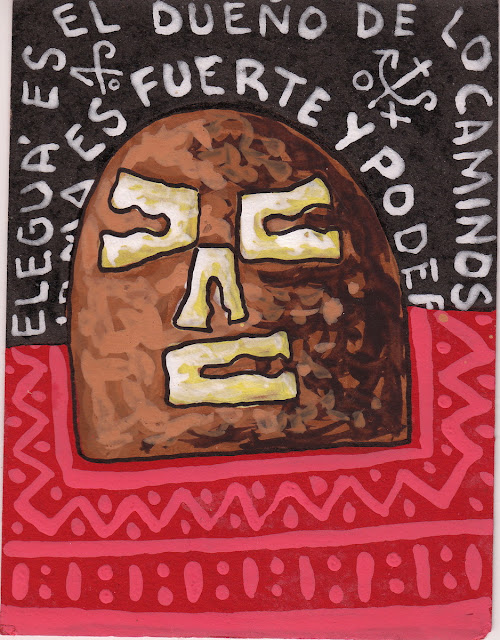 I have a feeling that Elegua has been very active in Cuba lately, opening doors and opening hearts... 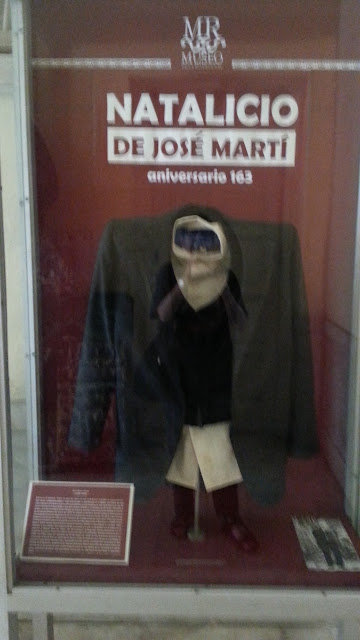 This is Jose Marti's jacket, vest, and shirt in the Museum of the Revolution.  It was perfect for Obama to lay a wreath at Marti's monument today.  I was in Havana for only a short time, but one can feel the spirit of Jose Marti infusing new generations with his concepts of freedom, liberty, and democracy. It was especially strong in Callejon de Hamel, as you can see in the image at the top. The future for all of us is so hopeful.

I haven't posted a blog since last October.  I thought I was done with it, but this was too important and emotional.  The photos are mine, except for Obama laying the wreath.

Posted by Susan Richards at 1:27 PM No comments: