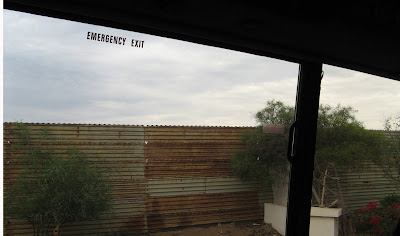 It was a relief that yesterday's bus trip to Tijuana and Rosarito, "Artists of the Border," sponsored by the Atheneum Music and Arts Library, http://www.ljathenaeum.org, wasn't cancelled because of the fires. My daughter and I had been looking forward to it, and now it was even more welcome. The high winds, falling ash, and poor air quality of the last week had no respect for national boundaries, but the worst was behind us. I had not been to the Centro Cultural Tijuana (CECUT) in several years and was amazed by the building boom in the whole surrounding area, including now McDonalds and Starbucks. Fortunately it also includes a new building going up at the Centro that will house an International Gallery built to museum standards, putting Tijuana on the international circuit of traveling exhibitions. Amazingly, this is sponsored by the National Council for Culture and the Arts: the government!

We also visited the Instituto de Cultura de Baja California, a state sponsored gallery which promotes the work of emerging, even edgy and controversial artists, as well as established artists. My daughter expressed a desire to purchase a small print. The gallery Director took her name and email address to pass along directly to the artist. "You can do business directly with each other" he said. It took me the whole day to wrap my mind around that. The gallery didn't take a percentage of sales, because their overhead is paid by the government. Not worried about survival they can take risks in who they show. As far as I can tell, their role is to provide exposure for the artists, be a cultural resource for the public at large, and connect potential collectors up with the artists. WOW!

I took the photograph above through our bus window, showing a section of the border fence in the upscale gated community where one of the artists we visited lived and worked. The neighboring home had a tree house in the backyard from which one could see over the fence into the United States. My understanding and appreciation of what it means to be part of this vital and rich border culture was deepened on many levels. The dance of inside/outside, who influences who, and just what is a border anyway, became more intricate.
Posted by Susan Richards at 11:46 AM